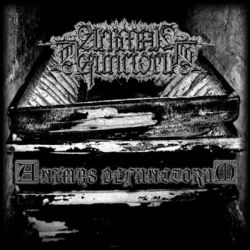 One more review is needed in order to make this album eligible for ranked awards
(Top 100 & Awards page).
80%

Ánimas Defunctorum are a solo project from Columbia that plays a very raw and depressive form of Black Metal, and this is a review of his self-titled 2021 album, which was released by Odio Eterno Productions.

Dark yet melodic riffing starts off the album while all of the musical instruments also have a very powerful sound to them. A great portion of the tracks are also very long and epic in length, along with all of the vocals being high pitched depressive black metal screams and some tracks also add in a small amount of clean playing and acoustic guitars.

Dark sounding melodies are also added into some of the guitar leads and solos while the music also adds in a great amount of mid 90's to early 2000' era influences. One of the songs also introduces synths onto the album along with all of the music sticking to a very slow or mid tempo direction.

Ánimas Defunctorum plays a style of Black Metal that is very raw and heavily rooted in the early era of the depressive side of the genre. The production sounds very dark and raw while the lyrics are written in Spanish and cover abyssal, madness, grief, rage, suicide, nocturnal and despair themes.

In my opinion, Ánimas Defunctorum are a very great sounding raw and depressive Black Metal solo project, and if you are a fan of this musical genre, you should check out this recording. Recommended tracks include "Marcha sin retorno al opaco desierto" "En el tortuoso vacío yo me abismo" and "Terrible extravío en la maleza vital (momento terminal)".