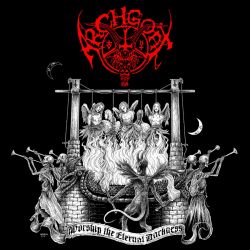 Archgoat is one of those band who were pretty good when they begin their career, but have become more and more talented with the time. Now, in my opinion, Archgoat is by far the best black/death band and clearly one of the greatest too. All their album are fucking great and are all better than the previous ones. Let's review this this Finnish pearl.


So, let's start with the good point. Firstly, this album is more black metal than the other, if you know what i mean. Like in the song "Black Womb of Gnosis" for example that is for me one of the best song of this album. The riffs are more black metal than black/death, like in the album "The Light Devouring Darkness" but on a completely different way. The riffs are one of the most important point of this album, they are AWESOME. Each riff is good, and they are really different compare to the other albums, the best example for me is the riff of "Rats Pray God", there is a kind of death n roll influence that is really cool. Another great point about the guitar is that some song have a solo, a thing that we do not see often in black/death. Also, the voice of Lord Angelslayer is like always really deep and dark, the perfect voice for this album. Another good point is the intro that is fuck top. It's dark, weird, satanic, creepy, everything that makes a good intro! This is also something that i love of Archgoat, they are pushing the antichrist and satanic thing at another level, and not only on this album. Just look at the album cover all their album (that have some of the best art ever IMO), the name of the songs, the lyrics, everything is extremely blasphemous and i love that.


There is not a lot of bad point on this album but still there is some. The first one that i see is that at the end, it become a bit repititive. Like i said previously the riff are awesome, but sometimes they are really similar to each other and at the end it can become a bit boring, especially for the people who more like more technical music where the riff and the chorus are always totally different, like Emperor for example. You have to like blasting non-stop riff to like this album, and i do so that's why i like this album but i know some people can't stand Archgoat or black/death band in general like Blasphemy or Black Withchery because of that. Another point that i will not really count like a bad point are the drums, they are not really good but not bad too, they do the job.


To finish this review, i will say that this album is awesome and with the years, Archgoat is becoming better and better. This album have become my top 3 Archgoat album, with The Light Devouring Darkness and Heavenly Vulva at the first and second place. This band is constantly becoming better and i really hope that they will continue to release stuff and that they will come to Montréal one day so i can finally see them live! So, hope you enjoy this full-lenght and have a blasphemous day.

Leave a comment
for 'Archgoat - Worship the Eternal Darkness'

Archgoat in the news