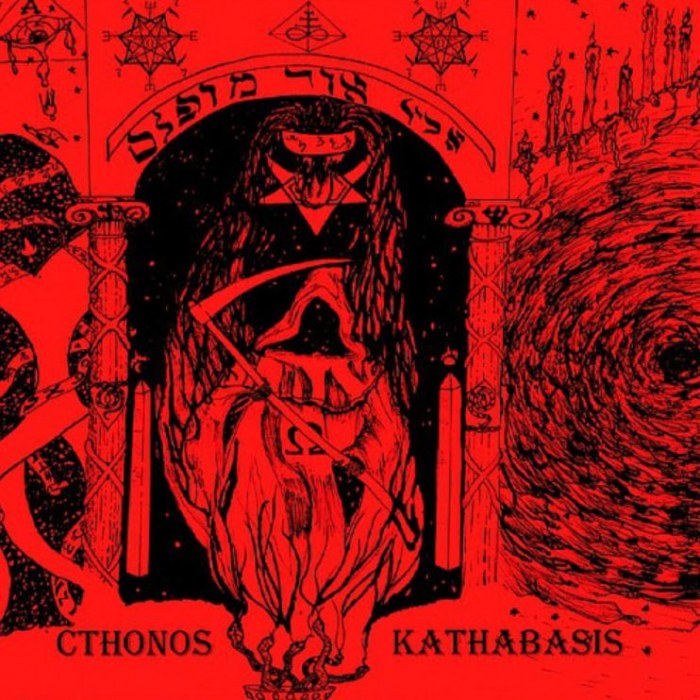 Five members band, hidden behind the veil of mystery of the classic Black Metal hides this pentagram of Colombian sorcerers, in the mountains of Antioquia ARKANUS MORS was born in 2014, translating we would find something like “arcane death”. This band has at least two members with a previous career with another Black Metal bands from Medellín city called NAXAC who released an album in 2012 but ended up separating in those years, this separation gave birth then this other proposal called Arkanus Mors, which has been active during these years and with some recognition in Medellín´s underground for some of its concerts, and only until the beginning of this year 2021 did they release their first work entitled CTHONOS KATHABASIS, of which I will write a few words below.

In January 2021 the full-length CTHONOS KATHABASIS was released in compact disk format, some of us expected it already due to the promotional video clips on Arkanus Mors' YouTube channel, and from those days you could see the blackness and malignancy of its sound and its esthetic art. The compact disk in jewel case format, with an 8-page color booklet, with a predominance of red tones, the graphic art is based on the artistic and arcane work of Azif (Vocals) who was also the designer of the layout, showing drawings of necromancers, witches, ritual fire, snakes and chalices, as well as some photos of the members ritualizing among bones, skulls and fire, therefore we find an absolutely own and original art.

When you start to look more deeply you can see how the music approaches to classic Black Metal with melodic elements, standard E tuning and analog drums, with a quite natural sound without digital arrangement and so far from the electronic sound of today black metal; The albums length exceeds 60 minutes, distributed in 8 songs including an intro and an intermezzo, personally I am adept at this type of duration in black metal albums, because it is frustrating to buy an album and that after 25 minutes it is ending, but hey, in this case we have material to listen to for an hour, so it is a plus point that I give to the Cthonos Kathabasis.

CTHONOS is an intro track, quite dark, lasting almost 3 minutes, with slow and calm music, acoustic guitars, string-style keyboards and organ, a violin is also heard which is played by Deathmask according to the credits of the booklet. Then they attack with QAYIN ET MORS that begins with an electric guitar accompanied by the kick and crash hits. We then hear all the aggressiveness of Azif's shouts with voices torn in medium tones quite similar to those of Nocturno Culto de Darkthrone. Another valuable detail is the felt male lyrical voices, performed by both Azif and Inferis (Guitar / Vocals). WHEN THE OLD SKY'S BURNS could be said to be the shortest song on the album with 6 minutes, we see how then the sound and music of Arkanus Mors is defined, slowness, hypnotism, melody, fast and aggressive sound without ever leaving the essence of Black Metal or enter into absurd fusions with other subgenres or fall into trendie sound, we can hear the harsh vocals and screams of Azif in the Aaskereia´s best style, as well as some liturgical lyrical songs of very good musical quality. NOCTURNAL LANDSCAPES establishes us in the idea of being listening to a clandestine and mature band from South of America, with absolutely melancholic and dramatic passages, we could evoke some Brazilian bands of the most clandestine, hidden and satanic Black Metal such as a Spell Forest or Govanon. In NECROCEREMONY after more than 20 minutes we want to continue listening to this clandestine Black Metal album, we continue with the melancholy and nostalgia for the nocturnalness and malignancy of this demonic sect, we enter the necromantic ritual of horrendous and abyssal Sabbath madness. KATHABASIS presents an intermezzo with classical guitar arpeggios and 50 seconds long. LORD BAALTZELMOTH is a song of eleven and a half minutes, which may seem exhausting to many, but lovers of contemplative sound may find it very interesting, the slowness, the middle times and the almost romantic nocturnal melody continue to prevail in this first opus by Arkanus Mors. The impious rite culminates with MEPHISTOPHELES NOCTIS, the 15-minute epic song, the journey through the infernal corridors of the lower entities, goetic manifestation of the macabre liturgy, clean guitars, harsh and lyrical chants, electric guitars in adoration of the schizoid cult, undoubtedly the satanic epilogue of the Cthonos Kathabasis.

In the words of the members of the band:
--- “Giving an ideological face to Arkanus Mors is to enter into an exploration between mysticism, esotericism and occultism from spirituality, through elevated states of consciousness, taking up ritualism as the main axis in praxis and moving away of the theory that is now so prostituted by the media since recent years, experiencing the members' personal way without the textuality of contemporary magic, seeking in their own nature the consciousness of themselves obtaining visions, developing autognosis, connecting primitive bases with the phases of consciousness, combining processes of current cults that have an argument in developed practices of antinomic, chthonic, adversarial, anticosmic works, among many others that it is not possible to deliver openly, fed at their base by relevant exercises for deep practices , without belonging to any order directly, out of respect for work Personal garlic and feel on your way. Arkanus Mors is a collection of experiences within the practice, delivered by each of those who compose it from their personal life, therefore, it is not appropriate to provide clarity on a specific ideology or practice in favor of respect for the cult, path, or ideas between the sacred and the pertinent, before this the viewer and / or listener are offered an experience that can generate in them some disturbing questions about themselves, as is generated by art in any form of expression and who seeks something more between the lines with their capacity for personal understanding or sensitivity of their veils. May the fire burn and the dead smell the incense of those who do not fear the consequences. FROM OMNI RE SCIBILI ET QUIBUSDAM ALIIS ”---

The Cthonos Kathabasis album was recorded in Inferis' own studio (Arkanus Mors Guitars), mastered by Arkanus Mors own members. Therefore the sound was totally achieved by Arkanus Mors, an independent, clandestine and sincere work, which is then characterized by differentiating itself from the local and foreign black metal trendie sound. Of course, to the ears of an audiophile it will not be entirely pleasant, as it is not a work designed for those who are adept at exquisite and professional sounds, on the contrary, it appears to be conceived for unhealthy ears and lovers of noisy and dirty black metal. Recommended work for those who are looking for melodic, hypnotic and diabolical notes. Favorite tracks: QAYIN ET MORS, NOCTURNAL LANDSCAPES and NECROCEREMONY.

some Naxac (Col) former members make up Arkanus Mors (Col), an independent and clandestine work of the Medellín Black Metal, a good piece for the followers of the BM in its most clandestine form, black magic for devotes of the occult expressed in music.

Report an error
on this page
▲ Return to top ▲
Page loaded
Loaded
in 0.43
seconds
s.