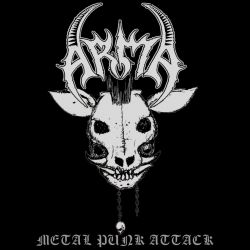 Well, as you may know, the origin of Black Metal was rooted in Venom's Motörhead Speed Metal worship, and Motörhead was heavily influenced by the punk bands, so it's not a very original idea to mix punk with metal, since it was the origin of the goddamn genre! Punk attitudes and influences can be found in a variety of old school bands, like early Bathory and especially Hellhammer.

This release here very much reminds me of the early days of Bathory more than anything else. Since the riffs are similar (as in all punk related bands!), I will see this as one long song. The overall sound of the album (demo) is very much based upon the first recording of Sacrifice by Bathory on the "Scandinavian Metal Attack - Vol. 1" album. The riffs and the solos are very much a continuation of that song. The vocals are incredibly similar to Tom G. Warrior's voice on early Hellhammer / Celtic Frost.

As I said, it sounds like one long song, but the song "Marche ou Morra" is probably the highlight of this release. What an incredible song. Also, another highlight is the rather touching tribute song to Quorthon.

PeaceThroughAnarchy on 16th May, 2021
Trusted User - Lycanthropia.net - 160 reviews
Bang That Head That Doesn't Bang to Sarcofago.

No comments yet.
Leave a comment
for 'Arma - Metal Punk Attack'