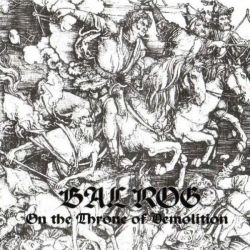 On the Throne of Demolition

Balrog - On the Throne of Demolition review by Warblackmetal666

Despite the fact that the Belarusian Black Metal scene is really underground, they still have some pretty good bands, and Balrog is one of them. Balrog is not a band that I would listen to everyday, firstly because the band only released one demo and one album, but also because this is not a band to listen to often, I don't know why, I become bored pretty quickly if I listen to this band often, even if I really like this album, but one or two times per month, it's perfect. Let's start, like every time, with the good points.

One of the strongest points of this album are the bass lines. Balrog (the guy) is a pretty good bassist, but also a really good vocalist and guitarist. A bass line that will stay in your head for the next 2 weeks after you listen to this album is on ''Opus Fifth'', and another good bass riff is in the first song, ''Black Depths of awarness'', at exactly 1:45, it's an awesome short moment that I love. For the guitar, the best riffs in my opinion are on the songs ''The Hate Triumph'' and ''Black Depths of Awarness''. Now, the vocals. They are really crusty and raw, and remind me a bit of the voice of Nocturno Culto on the great album ''Panzerfaust'', by Darkthrone.

We are now at the bad points. The worst point of this album are the drums, they are really repetitive. I guess that Balrog (the guy) is not a drummer, but Black Metal needs some, so he did it by putting some beats here and there without really caring if it was good or not. The second bad point, that some people will probably mention, is the length of the album, which is pretty short, only 32:52. But at the same time, and I pretty much always talk about this in my reviews, if you have nothing more to say, shut up, because most of the time, you're going to want to make the album length longer by putting some filler songs in, and most of the time these songs are at the end of the album, the part of the album where people are most of time more inclined (not sure if this word make senses in English, it's an expression in Quebecer French, sorry if it doesn't make sense) to find the album boring.

To conclude this review, I seriously recommend this album, it' worth listening to, a good album from a good Belarusian band. Hope you enjoy and have a good day!

0 Comments
for 'Balrog (BLR) - On the Throne of Demolition'

Leave a comment
for 'Balrog (BLR) - On the Throne of Demolition'