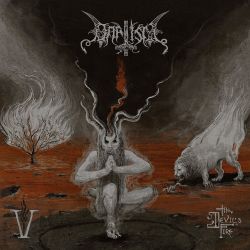 One more review is needed in order to make this album eligible for ranked awards.
70%

An album that has a really strong start, but a pretty disappointing end. The first time I listened to this, at the beginning I was like Oh Shit, it's gonna be good because "Satananda" is an extremely good song and a great starter, but after this, again, I feel disappointed. It's such a great first song but such a boring finish. But, let's check out the good and the bad points like always.

I will say that again, the strongest point of this album is the starter song, some really good riffs and melodies. In the second song too, "The Sacrament of Blood and Ash", the chorus riff and melody are awesome, but the rest of the song is not that good, a normal song I will say. The voice of Lord Sargofagian is, I will say, good, but not more or less than good, just good. There is nothing special about it, so I will count this as a good point because he's not bad. Also, the drums are really good on this album, a thing that helps a lot to make it more entertaining. Nothing to say about the bass line because we don't really hear it.

Now, the least pleasant part, the bad point. Firstly, in pretty much every song there is a really strong riff, but for the rest of the song, the riffs are not entertaining at all, and sometimes really boring. Most of the time, it's in the chorus that the riff and the melody are really good, but after that, I mean, it's just like basic Black Metal, nothing special or entertaining at all. So, in songs like ''The Sacrament of Blood and Ash", the chorus is awesome, but the rest of the song ruins everything, and that's sad because again, the chorus is awesome. The only completely good song is "Satananda". Another bad point is the use of the clean vocals. I like clean vocal moments in Black Metal, but Lord Sargofagian abuses it a bit. In pretty much every song there is a clean moment, and said like this, there is no problem, but they are all the same in every song, and they are boring, so it ruins them completely. Sometimes he tries to get a bit emotional, like in the song "Abyss", but I find it more cringe and boring than anything. I don't know why he tries to be emotional like this in every song, man you don't have it, you clearly don't have it, why are you trying anyway?

In "Cold Eternity" he tries something with a synthesizer, but he fails so bad, seriously. This song is for me probably the worst song of the album, mostly because of this. He even tries to do a punching riff in the middle of the song, but he fail completely. One thing that I say often, when I speak about albums like this, is that if you see that you're not able to create something out of the ordinary, keep it simple. Spend less time on your synthesizer or any other effect and put this time into making good riffs, and not just for the chorus, and try to create a good melody without breaking your head (not sure if it's an expression that you use and English, sorry if you don't understand what I mean). But, after a big fail on "Cold Eternity", he patches the error a bit with "Malignant Shadows", that is for me my favorite song of the album, this one is good seriously.

To conclude this review, I will say, try it and make your own opinion about it. I know that a lot of people like it, but for me, it doesn't do it at all. However, I recommend you two songs, "Satananda" and "Malignant Shadows". I hope you will enjoy this album more than I do, cheers.

Leave a comment
for 'Baptism - V: The Devil's Fire'

Baptism in the news