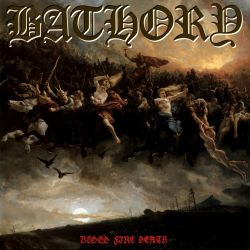 End of an era as Satan joins forces with Odin!

Bathory is a band that no one needs to explain anything about! (Quorthon didn't find the need to explain it, so why should we?). It's magic. Black Metal wouldn't have been like it is if it wasn't for this band. Quorthon's legacy is an incredible one.

This album is the bridge between the old school Bathory and the latter day Bathory. Quorthon started to move away from the primitive, satanic lyrics and imagery, and started to become more mature. Needless to say, this album doesn't have any weak songs, or indeed any weak moments. For people who think this is not Black Metal, all I have to say is this; hit the books dumbass! This is as true as it gets!

The intro of the album is a very dramatic, minimal, classical piece, which prepares the listener for the coming storm. Which storm? A FINE DAY TO DAY!

Arguably the best Bathory song, and the song that single-handedly invented the Pagan Black Metal style. The song starts with a beautiful acoustic intro as Quorthon is painting a picture of the night before the battle. The song suddenly goes into full on, no holding back mode with a savage riff.
The songs continues to paint a more vivid picture of the night before, dawn, and the morning of battle in a very powerful way. The drums pound like a million horses galloping at the same time (this drumming style became a big part of early 90s Norwegian Black Metal scene) and, oh yeah! Did I mention how great the solos on this song are? Goddamn! How can a solo be so fast and extreme and beautiful and melodic at the same time? How?! "A Fine Day to Die" is truly a timeless classic.

Then we arrive at the Slayer worship of "The Golden Walls of Heaven". The gallops of horses on "A Fine Day to Die" suddenly turn into Satan's hordes entering heaven! As I said, this sounds a lot like "Hell Awaits" by Slayer, but with a massive difference. What difference? The solos. The solos in this album are all incredible in a very different way. Sorry, but Slayer can't do this (nor any other band).

Then we arrive the extremely catchy "Pace 'till Death". This riff is primarily designed for headbanging. If you don't feel the need to headbang after listening to this you should go to a doctor to check your neck organs!

The next song, "Holocaust", is pure old school Black Metal at its finest. Seriously dude, wow! The highlight of this song must be Quorthon's vocals. It's the definition of the Black Metal vocal style if you ask me. The riffs of the song are in the same vein as early 80s thrash gods like Slayer (and Bathory of course!!)

At this point we arrive at Side B. "For All Those Who Died" is a really good mid-pace catchy song, with a really 80s sound. The riff is scorching. The guitar tone is dirty, gritty, almost bluesy! Each time Quorthon screams FOR ALL THOSE WHO DIED a very blasphemous feeling surges deep inside me. And when he laughs after the solo... ARGHHHHHHH.

"Dies Irae" is another pure old school Black Metal, and arguably the most Black Metal song on this album. I don't wanna even talk about the riffage and vocals on this one (or the badass hidden message on the lyrics!) but the most interesting part about this song happens when the song starts to slow down. This type of slow, obscure Black Metal was first heard on some songs on "The Return......" album from 1985. Again... ARGHHH! Finally, the song ends with a beautiful harmonic melody, and we arrive at the last stop of this album. The EPIC title track.

"Blood Fire Death" is very much a twin track for "A Fine Day to Die". It starts in the same type of story-telling manner, with Quorthon painting a picture of the battle scenery. The high pitched solos of this song are not as strong as the ones on "A Fine Day to Die", but still are unforgettable (this type of solo was more apparent on the Hammerheart album).

The most epic part of the song (and probably the whole album) starts at around 6:30, when everything stops, and you can hear a beautiful and melancholic acoustic guitar riff supported by a really dark and atmospheric keyboard layer. After some seconds the guitars come back in, in an epic manner. The melancholic scenery of the battleworn field suddenly turns into a blood-red angry final assault!

The final part of the song is the Death part of "Blood Fire Death" (probably). Another version of the riff at the beginning, finally the album goes away with the outro track, which is the usual dramatic soundscape of hell!

What an amazing legacy. Everything about this album is great. It's a little shame that this album gets less attention than the previous 3 albums (or even Hammerheart), when in reality it's the best of both worlds. This album marked the end of the Black Metal era for Bathory, but what a way to end an era.

All in all, although this is not my favourite Bathory release, I have to admit that it's the best Bathory album!

Hail Quorthon! Hail the Hordes! Your legacy will not be forgotten!

man I love this shit so much, have all his albums, love every one

Slayer and Metallica influences on this album. Epic Masterpiece...

when odin joined forces with satanas.

It was with this album that Quorthon scored his high water mark with the theme of odinist paganism. If the epic move is your thing and you love to feel, to notice the pressure of a musical note in the soul, and you would sell to your mother to touch the pure adventure, to smell and to taste the past and to live a total viking war, Blood Fire Death awaits you.