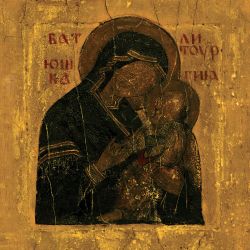 It's easy to see why everyone wanted to be the owner of this band!

Many people see this album as an overhyped, overrated release because of the controversies and disputes surrounding it. But let's not get into the politics.

This album is simply a masterpiece! It's really nice to hear mixtures of brutal / epic music with beautiful Eastern melancholy. Many people complained about the almost Orthodox priest chants here, but as far as I'm concerned, they give more atmosphere to the album.

I find the overall sound of the album very similar to The Ruins of Beverast, especially if you listen carefully to the arrangements and drumming.

Choosing a highlight on this album is very difficult. Whether it's the incredible opening track or the blasting riffs of track 2 and 4, or the epic doomy tracks like track 6 and 7, I wouldn't recommend listening to one song. This album works best as a package.

Technically speaking, I can't find anything wrong with this album, but one little gripe would be the fact that some songs tend to be overlong and repetitive. This repetition works well with the more doomy songs, but not so well with the mid-paced parts.

All in all, don't mind the controversies and hypes about this album. It's one of the strong moments of the great Polish Black Metal scene.

Their music and lyrics, which are written exclusively in Old Church Slavonic language, are inspired by the Eastern Orthodox Church. The band members wear habits and eastern orthodox schemas during live performances to conceal their identities,
and remain anonymous. In contrast with many other black metal bands, they use seven, eight and recently nine string guitars.


The word Batushka (Russian Cyrillic: Батюшка) is the titular equivalent of a
hieromonk in Eastern Orthodoxy or, broadly, of any Orthodox priest. The transcription used by the band is improper, another possible transcription of Батюшка into Latin would be Batyushka.