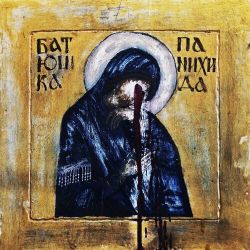 One more review is needed in order to make this album eligible for ranked awards
(Top 100 & Awards page).
76%

"Not as bad as Bart's version of the band", but there are millions of things better than Bart's Band!

Amid the divorce of Bart and Derph after the release of the first album, they each tried to make a version of the band. I hate it when bands do that! I'm not going to even write a review for Bart's version, since it's one of the most generic things I've ever listened to! That album was almost as if they rushed Bart into making it because they had unpaid bills and mortgages! Needless to say, you should definitely avoid that band, and only stick to the original 2015 album, but if you want more of that this might be appealing to you.

The overall outlook of this album is not great. Like the album cover, most of the riffs and harmonies sound very similar to the first album. The guitar tone is not as fantastic as on the first album, but it is still badass. As for the riffs, it really works on songs like track 4, but on the other hand there are lots of generic riffs like in the first three songs (they are not bad in any way, but I can't find anything that interesting either).

The biggest disappointment for me is the vocal performance. Even though I don't like Bart's band, I have to say I was a huge fan of his vocal performance on the first album (why did you have to fuck up the band, huh?). At some points the vocals sound like a Metalcore singer (which is a big no no for me!).

Overall, I have to say that the production and overall sound of the album are not that different than the original formation of the band, and for the most part it's really good. The guitars and drumming performances are very tight too, but the vocal performance and some of the bland riffs make this a very forgettable album in my book. There is nothing wrong with it, but the expectation was higher than this.