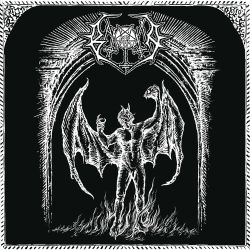 I wish it was less dOOm and more bOOm!

Baxaxaxa started out as an underground cult band in the early 90s which combined the doomy, old school Cult Metal and Black metal affairs of Hellhammer with some of the newly emerging melodic affairs of the time from ScandinaviA fter releasing a demo in 1992 (which is a true underground classic BTW!) they simply ran to the hills and never looked back on this project! Until the year 2019, when they suddenly reemerged from nowhere with a brand new demo tape called "The Old Evil".

The demo in question was very haunting and promising, and started to make us wonder whether it would actually lead to a full-length or not. In 2020 they made an EP which wasn't quite as engaging as the demo that preceded it, but thankfully it wasn't a major release. Earlier this year, they finally announced their debut full-length album's release date with a promotional single out of it. The song that was released was the title track, which was very exciting for me and sounded so fresh yet so old school.

The album starts with a doomy, horror movie-like intro (just like track 3 and track 5!) and continues off to be doomy as fuck from there on!

Immediately you sense that the powerful keyboards create a very obscure and rather haunting atmosphere (especially on the first and third tracks). This strength regarding the clever usage of keyboards wasn't much of a surprise for me, as their first demo and their newer material was heavily praised for this quality (in fact, some may even call this band as one of the very first bands which used keyboards in the Second Wave of Black Metal, alongside bands like Enslaved, and so on).

Bathory), the majority of this album comes closest to early

Celtic frost. Also, some songs like the sixth and eighth track lean towards the Second Wave of Black Metal rather than the 80s stuff.

The drumming is pretty much what would you expect from a band of this nature; primitive, repetitive and non-technical, which is there just to further color the sound of the riffs. This said, the ferocity of the drumming is very good and creates a powerful rhythm section. Also, it's worth mentioning that they used a variety of drumming beats for this album thanks to the diverse songwriting showcased; at some moments doomy and slow, sometimes galloping, just a D-beat at some points, and of course the ever present speed metal double bass beat (also some old school

The vocals are clearly inspired by

Venom with a tinge of Tom G. Warrior added on top of that. The German accent is authentically 80s, and gives an old school

Picking a highlight here is pretty difficult since there is quite a lot of badass tracks provided on this album. However, there are some parts that are really badass including: the breakdown-like riff towards the end of track 2, the thrashy onslaught of the final track, and the Black 'n' Roll worship of the sixth track.

Now that I mentioned the term Black 'n' Roll, this album has tons of parts which would be familiar to mid-era

Darkthrone lovers. There is the same punky Hellhammer attitude (most notably on the third and sixth tracks).

Overall, I think this is a very great old school album and didn't disappoint me. Though I have to criticize some points, like the heavy focus on drone like chants and synth parts (which go for too long at some points), and the overlong slow parts like the third track. Also, I think it would be better to ease on some of the focus on creating the atmosphere and make the blasphemous German Black Metal that we crave so much from this band. I was expecting a haunting version of Moonblood but the end result is still very cool! It's just that it would be sooo much cooler to have more songs like the final 3 songs rather than the first 3 songs on the album (less dOOm and more bOOm if you know what I mean!).

No comments yet.
Leave a comment
for 'Baxaxaxa - Catacomb Cult'