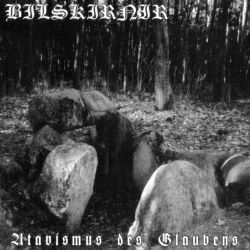 One more review is needed in order to make this album eligible for ranked awards.
71%

Bilskirnir's discography is one of the most consistent in the German Black Metal scene, but I have to say I'm not a big fan of this release. The riffs are not as memorable as other Bilskirnir releases.

One of the few good aspects of this release is the vocals, the classic lone wolf howls at their best. The production is not bad either. It's raw, but an organic type of raw!

Unfortunately, I can't say too many kind words about the riffs though. They are not that memorable, and slightly out of tune.

The only great and memorable song from this release is the intro piece BY FAR! What a fantastic album opener this is.

All in all, not bad, but a bit weak compared to other Bilskirnir releases.

PeaceThroughAnarchy on 6th May, 2021 -
Trusted User - Lycanthropia.net - 155 reviews
Bang That Head That Doesn't Bang to Sarcofago.

Even the intro is very memorable and fantastic.