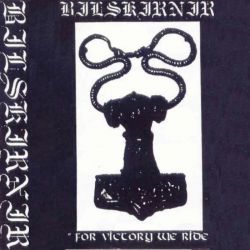 For Victory We Ride

One more review is needed in order to make this album eligible for ranked awards
(Top 100 & Awards page).
72%

The Usual BM demo for a new band

Since there are better recordings of most of the songs here in Bilskirnir's later discography, I won't write a full review. Instead, I'll talk about some of the interesting songs exclusive to this demo, which are "A Wandering Through a Cold Winternight", and a Burzum cover song.

"A Wandering Through a Cold Winternight" is an extremely raw and cold song, something usually seen in Depressive Black Metal bands rather than a pagan one, but deep down in its riffs you can hear that German epicness.

The cover song is very good indeed, but it's not that memorable to be honest. It sounds almost identical to the original.

All in all, not great, but a good start for the band!

Leave a comment
for 'Bilskirnir - For Victory We Ride'

Leave a comment
for 'Bilskirnir - For Victory We Ride'