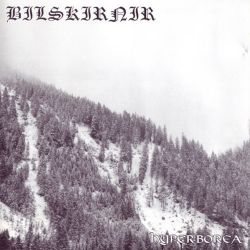 For those who can't get enough of Burzum!

Bilskirnir is probably the best example of a band that captured the magic of early Burzum. The vocals on almost all of Bilskirnir's releases are almost identical to Varg's vocal style on "Filosofem", but the similarities in vocals are even more obvious on this release.

The first song is by far the most memorable of the album, and is a slow song with a catchy guitar riff and a fantastic, cold, wintery atmosphere. As we move towards the second and third tracks, the pace starts to rise a bit, and the layers of guitar tracks start to increase.

Also, the lyrical themes start to change gradually. The first song's lyrical themes are mostly based on coldness and isolation, but the second and third songs start to include more pagan themes related to purity.

The production is very underground, but not too raw. It reminds me of how mid-90s raw Norwegian Black Metal sounds.

As a whole, it's one of the best releases by this band, and I would recommend this to any old school Burzum / Graveland fan.

PeaceThroughAnarchy on 6th May, 2021
Trusted User - Lycanthropia.net - 155 reviews
Bang That Head That Doesn't Bang to Sarcofago.