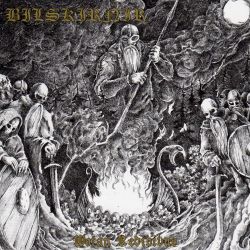 The fourth and so far final full-length release by Bilskirnir follows the same trajectory as the previous full-length.

The production is a bit cleaner than the previous album, which some people might find a bit too clean, but as a whole it's good.

The guitars and drums are perfectly in tune, and nicely recorded, but I'm sensing that Widar's vocals started to fade at this point. It's not as raw or as angry as the early albums. This can be best seen on the sixth track (which had much better versions in the past by the way).

The best track of the album is by far "Blood And Spirit". Other highlights include "Siegsonne", "Never Dying Light" and "As This World Ends".

The fifth and sixth tracks are incredible, but I think there are better versions of these songs on other releases. Either way, "Vorväter" is one of the absolute gems in the Bilskirnir discography. Fantastic, melancholic riffs derived from early Strid, Burzum, and Forgotten Woods.

There are also some Gothic influences on some other tracks, which is somehow cool.

As a whole, a very good release, but not perfect.

Less raw than the previous releases but still very much perfect