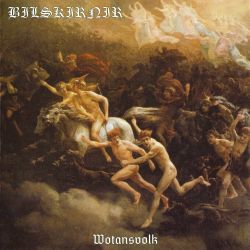 The best Bilskirnir release by far!

Bilskirnir is one of the forgotten names in underground Pagan Black Metal (unfortunately). The intro is a typical German electronic intro, but after that all hell breaks loose!

The second track is by far the best song on the album, and one of the best songs I've ever heard in my life. Seriously, just listen to that song and I'll guarantee you'll fall in love with this album just from that song alone. The layered guitar work is catchy and epic as hell! It really paints the cover art in a musical way.

The best thing about this album is by far its production, which is very crisp (raw Black Metal lovers probably would hate this release!).

All in all, one of the best Black Metal albums I've ever listened to, and by far the best Bilskirnir release.

PeaceThroughAnarchy on 6th May, 2021
Trusted User - Lycanthropia.net - 155 reviews
Bang That Head That Doesn't Bang to Sarcofago.