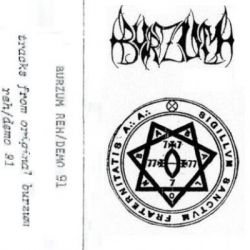 One more review is needed in order to make this album eligible for ranked awards
(Top 100 & Awards page).
67%

This one is even weirder than the first demo. As I said before, the only confirmed proper demo is the first one, and this one is a compilation of the deleted songs from that and other demos!

In the first five songs, all you can hear are the bass drums (which is nice if you like bass drums). On tracks 5-6 all you hear is the guitars, but it sounds like they were recorded underwater!

The only interesting track among these 7 tracks is the second track, "Depressive Visions of the Cursed Warrior", but it's really blurry. I recommend you listen to the Bilskirnir cover of this song. It's really incredible!

The remaining tracks are a bit better compared with the first 7, but it's still way too blurry and rough.
Like on the previous demo, the "Channeling the Power of Souls into a New God" sounds much better than the studio version, and it's actually a bit louder and clearer than the previous one, but boy oh boy, wtf is that clicking sound? Arghhhh it ruined it!

All in all, more meh, a sea of meh-ness.

An Overlooked Gem called "Depressive Visions of the Cursed Warrior" Plus a bunch of Fantastic songs recorded badly.