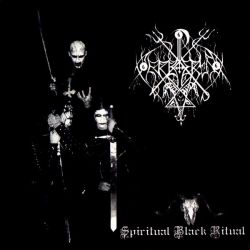 HYMNS FROM THE DARKNESS

Right now are people reviewing 40 years ago albums, then I do not see the error in reviewing a Black Metal opus released in 2006. Colombia is a country that perhaps tends to be like Brazil in the generation of Black Metal bands, they don’t only have a very good technical level, but also a great radical sound. "Spiritual Black Ritual" is an album perhaps tending towards oblivion like most of the South American clandestine Black Metal.

Cerberum is a band that I met precisely the year of the release of this, their first album, in 2006, after seeing them live I recognized the sound and melody that I like the most in Black Metal, beyond the qualifiers this band of Black Metal sounded like suicide, hatred, rage, melancholy immersed in despair and misanthropy, listening to the rhythm changes from fast and angry passages, to slow, depressive and hopeless passages, it was what I liked the most, and I did not hesitate to search the disco shops at the time for his compact disk released.

The album was produced in 2006 by Dark Music Productions from the city of Medellín, ColombiA t is a compact disk with a professional press, in jewel case format, with booklet, 12 tracks including 2 bonus tracks (live songs), and the total length is 58 minutes, something really good for the audiophile.

The sound of the Spiritual Black Ritual has clean, very well mastered drums, distorted and noisy guitars in a way that it is faithful to the genre, and the vocal work is extreme, harsh, guttural vocals and screams. The lyrical theme is satanist, occult and existentialist, and it relates very well to musical aggressiveness.

Mentioning favorite songs from Cerberum's first opus is a difficult work, I could mention SPIRITUAL DEMON with its frenetic ending “Hail Satan, Hail Satan, Hail Satan, Shemhamforash!”. Another song could be AVE SATAN, absolutely satanic and rhythmic song, this is one of the few lyrics that were published in the booklet. HYMN OF THE DARK CRADLE is a nostalgic journey, full of hatred and the melancholy of the satanic being and lone warrior, totally recommended for devotees of Black Metal in the vein of the 90s. OCCULT MYSTICISM is one of those tracks that does not go unnoticed, and that live is a kick to the neck, you don't stop bang your head when you hear that song, Ave Satán!.

In conclusion, this is an album for the adepts of the old sound, and far from the trends, therefore my rating is 95% because I consider it a great full length.

No comments yet.
Leave a comment
for 'Cerberum - Spiritual Black Ritual'