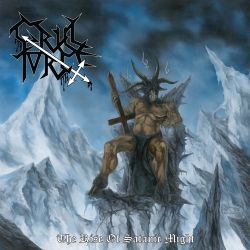 How to headbang in an old school fashion, Chapter One:

When you first start to listen to this album, and you hear that Venom-like chant on the first track, you immediately realize that this was made by people who were obsessed with Old School Black Metal acts (well, you might get that just by looking at the artwork, but anyway, who am I to judge!). The initial starter riff for the first song is just pure

Tormentor worship. There are lots of moments like this, where it reminds the listener of bands like

Even though you encounter lots of similarities with other bands, this is not just a mere Bathory copy. Everything has been done in a very unique and original way. The best example of this uniqueness is the Bathory cover track, "Necromancy". The overall sound and playing style is very fresh, but it doesn't try and take the old sound "further".

And it's not just the full on obscure Black Metal bands that are a major influence here. By listening to songs like "Forces of Hades" or "Deathstrike", you get the feeling you would get from listening to some old school Thrash Metal bands from Germany like

Kreator. Some people compare this band to others related to it, like

Old, but I have to say this is a far cry from any other Black/Thrash, since it doesn't really include any of the typical 90s techniques that were incorporated by bands such as

The vocal style here is pretty much old school Death/Thrash worship, but it sounds very suitable for the rest of the music. The riffs and solos are 80s as fuck (even though the production is very clean and almost modern).

As for the drumming and bass, there isn't much special about them. The drums sound like any other old school German Speed/Thrash Metal band, but they are recorded beautifully, and you can hear every single note.

The lyrical themes are not that groundbreaking to be honest. There is a song about Elizabeth Bathory. GOD! Enough with Elizabeth already!

Overall, although the album cover is like a cheesy 80s Thrash Metal album cover, the album itself is a far cry from any cheesy 80s bands. There is nothing new, but it creates the same kind of music as old legends, with a fresh sound.

Many narrow-minded people will call this sound "modern" or "plastic-y", but they couldn't be more wrong. It has the same dirty feeling as before, without the same damage to your precious ears! In one sentence: It's fucking appropriate!

0 Comments
for 'Cruel Force - The Rise of Satanic Might'

Cruel Force in the news