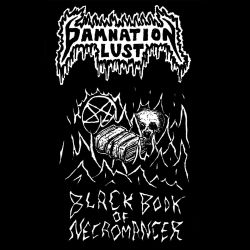 Nihil Verum Nisi Mors productions (A.K.A NVNM) is just 4-5 years old right now, but in this short period of time they have released tons of great old school material without any weak moments! Releases from bands such as

DSS are just a few to namedrop.

Damnation Lust is another consistent name to hail from that old school NJ scene.

Their sound can be best described as old school Primitive / Lo-Fi Blackened Death Metal, although, I might as well throw a little punk in that description as well since the songs are short catchy and full of the punk attitude that is common on Japanese Black/Thrash or Black/Death stuff like early

The production is authentic of the NJ sound (4-track cassette recorder with loosely tuned guitars!). Might I add, GREAT BASS lines?

In short, the tuning of the guitars and the heavy bass lines coupled with some spooky occasional keyboard layers, makes a haunting soundscape which reminds me of

The album only has 3 very short songs (the first track is just a spooky intro piece from the depth of hell!) and the songs are sync'd together so well that you don't feel the passage of time (OK! a very short amount of time). The album rises and falls in speed multiple times, and the best example of this transition is the first proper track, "Devastator", which starts in a very doomy and slow pace and then goes into full on

Sodom "In The Sign of Evil" mode, and goes back to a mid-paced Death Metal mode!

The vocals are one of the highlights of the album. Extremely obscure and sometimes down right scary!

No comments yet.
Leave a comment
for 'Damnation Lust - Black Book of Necromancer'

Leave a comment
for 'Damnation Lust - Black Book of Necromancer'