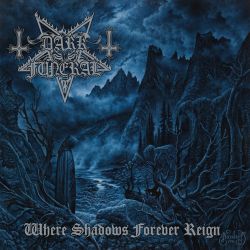 5 users have collected this album

First of all, let's start this review with a fact check; if you have read any of my reviews on this website, you can easily realize that I'm not a reviewer, and you will be right! I'm not, and I'm just writing a long comment in beginner-level essay format!

OK. Now that this is out of the way, let's get to the actual review.

Actually, no! Let's say another of my fact checks; I was never into Dark Funeral. Although I have a huge respect for Lord Ahriman as a person, I never liked their music. The first album was quite a fine album, and I like one song out of the second album (the second track), and I also loved the reissue of their debut EP, which had two EXCELLENT Bathory cover songs, but other than these, I hated anything they released after the first album! Most people like some of that stuff, and rate them as incredible albums, but I hated them! And I think that the problem can be deciphered by just looking at the album artworks on those albums! The first album had one of the most beautiful album covers by Necrolord, and the music sort of suited the atmosphere on that dark night (apart from the drumming of course!).

Anyway, those albums in between the first and this one had the same kind of boring satanic imagery in their music and on their covers. They sang about nothing but SATAN! The music was pretty much the repetition of the same, boring, blast-beat driven Swedish Black Metal with lots of Mayhem worship on the guitars and lots of Hail Satans!

Enough with the rant! In short, this album is not just as good as the first album, but it's even better! Yeah, there isn't any groundbreaking musicianship going on here, but it's nice to hear a fresh throwback album to the 90s done well!

The production is very dense and crisp, and the mix is as it should be. Their new vocalist does deliver some excellent vocals performances (not better than the previous vocalist, but just as good!), and the songwriting is much better than before. Yeah, there are some moments (like the second song), where they do the same-kind of blasterbation level of fast songs, but there are lots of slower, melancholic, and harmonic moments (like tracks 1 and 3). Overall, the riffs are much more melodic, without getting into Sacramentum territory! And might I add, some of the intense, fast songs like "Temple of Ahriman" have really nice choruses which the previous albums lacked.

Highlights? Well, in my opinion any song other than "As I Ascend" could be selected as the best song here, but my favorite has got to be the fantastic title track, which closes the album in a fantastic way!

Many people complain that with this album, they tried to repeat the first album, but even if that's true, would you blame Darkthrone for trying to recreate "Under a Funeral Moon"?!

Overall, this is one of the few releases by the band which shows lots of maturity in their songwriting. The musicianship is just as good as always, but since it isn't just blast-beats and tremolo picked guitars all the way, it does create a very unique atmosphere (well, unique compared to the other Dark Funeral albums!).

No comments yet.
Leave a comment
for 'Dark Funeral - Where Shadows Forever Reign'

Leave a comment
for 'Dark Funeral - Where Shadows Forever Reign'

Dark Funeral in the news