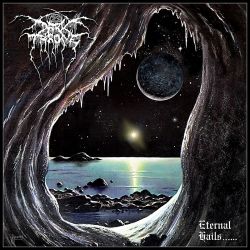 Submitted by PeaceThroughAnarchy
6 users have collected this album

What can be said about Darkthrone that hasn't been said already? They were the Kings of Black Metal in the 90s, and made a huge impact on all of the future Black Metal bands to come. Their "A Blaze in the Northern Sky" album was one of the first (if not the first) proper Black Metal albums to come out of Norway.

It was trend-setting/innovative and old school at the same time. Yeah, Mayhem was the first band to use corpse paint and shit, but it was the primitive black and white photo of Zephyrus with corpse paint that made everyone say "WHOA, I gotta check this out!".

Anyway, their music was groundbreaking beyond description. Name any Depressive BM band that isn't inspired by "Transilvanian Hunger". I'll be waiting! In short these guys are the most dedicated (in short, The Ultimate) Black metal band in history. Even though their main goal with their music was to continue the ways of old school 80s Black Metal bands, they changed their sound multiple times and experimented with different types of 80s metal in general. Like all experimentations, some of them worked, some didn't. After their momentous decision in 2004 to go fully old school and ditch the 90s sound, they experimented with tons of 80s ideas like Crust Punk, Hardcore, Speed Metal and so on. Although i'm a fan of all of them, I have to say I prefer their latest experimentation with old school Speed Metal that's been going on since "The Underground Resistence". On this (and on "Old Star", to some extent) they incorporated their love of Traditional and Epic Doom Metal as well (well, mostly Fenriz anyway!).

After months of waiting, the day of judgment is here upon Fenriz and Ted! I was so excited that I couldn't wait for the proper release date and decided to listen to it a day before it's initial release!

The first impressions showcase a continuation of the "Old Star" formula with the long, epic songwriting, although, the songs here are much longer, and generally more doom influenced than before.

The first track starts with a weird Post-punk like intro in the veins of Sisters of Mercy (intentional or unintentional). After the prologue, the song immediately turns into a Speed Metal anthem. Some of the riffs on this song remind me of the Total Death era of the band (especially songs like "Majestic Desolate Eye"). After some repetition of the said riff, the song slows down towards the end, then it finishes with the same Gothic/Post-punk part, and fades out in the most 80s fashion possible!

The guitar sound is a bit muffled compared with the previous albums, and the production feels more raw and rotten. It depends on your taste to like or dislike this sound, but one thing's for sure; it is inferior to the magnificient Production of "Arctic Thunder". Also, the drum sound does feel a bit inferior to that album (don't get me wrong, it's a fantastic drum sound as always. Fenriz never disappoints!).

The second song, which was released as a single prior to the album, is by far the slowest and doomiest song on here (confirming Fenriz' statement!). Towards the middle of the song there are some sick breakdowns, with some excellent drumming driving the song. The slight problem with this song (and this album in general) is the excessive amount of repetition. The songs sit on some riffs for too long. I know that they did this to create the "EPIC" atmosphere of the old school Doom bands, but some of the riffs in the middle of the song are quite uninspiring and unoriginal to be honest (even for a band like Darkthrone which does nothing but pay tribute to 80s gods like Celtic Frost and Bathory without inventing much new!). This said, the progression of the riffs from the beginning of the song towards the end is quite impressive.

The third song is another Black/Speed Metal anthem. One of the most notable parts on this song is the inclusion of simple, galloping drum parts which are reminiscent of "Blood, Fire, Death" by

Bathory.. There are also some keyboard-like guitar layers towards the middle which sound incredibly like the hooks on "Transilvanian Hunger". Just like the first two tracks, the riffs change a lot, which gives a progressive edge to the album rather than the primitive style I was expecting from Darkthrone. The riffs towards the end of the song are a mixture of the fast riffs on "The Underground Resistance" and the melodic parts of "Arctic Thunder", but I'm afraid there are not that many memorable riffs like on "Arctic Thunder" (for example, the riff on the title track, "Arctic Thunder").

Another pretty remarkable thing about this song (and some other parts from other songs) is the inclusion of some drum tricks which occur in the spots where the riffs transfer into other riffs.

The fourth track starts with a fantastic, atmospheric, distant guitar solo (which is probably inspired by some of the 80s Epic Heavy/Power Metal bands). After this rather mysterious intro, the song turns into another really doom-y track. This doom-y track is not a particularly memorable or remarkable riff to be honest, but at around 3:40 it speeds up to a fantastic, catchy, thrash-y riff with a fantastic bass line. At this point we have another example for the progression of the riffs. At around 4:40 the song slows down yet again into a mid-paced melodic part with decent harmonies. At 6:25 it creates a riff reminiscent of "The Underground Resistance" with a solo. I have to say, the solos are not as memorable and catchy as the ones on previous albums, especially "Arctic Thunder". You get the sense that they are there to provide smooth transitions for the other parts instead of breaking the repetition chain. The song finishes with a spooky spoken word part and a rather melodic riff.

As for the the last song; again, it begins with a rather dull mid-paced riff and starts to rise up at around 1:35. But after 3:20, the song dies and turns into a very weird acoustic part with the same spooky spoken parts. This part continues until the end and gradually rises up until it turns into a horror movie-like electronic song! It gives a very atmospheric and desolate feeling to the album, and works as a cool outro piece. I was expecting it to fade out in the 80s fashion, but it actually finishes abruptly at the highest and loudest point! To be honest, I think this song is the weakest song on the whole album. Not that it's bad, but it's more of a functional song than one to re-listen individually. This song almost makes this like a 70s progressive concept album (which is nice, but not very Darkthrone!).

Overall, this album didn't disappoint me, but didn't really impress me that much either. There are some clever songwriting and some little subtle tributes (or "Hails......") to old school Speed Metal, Epic Heavy Metal, Celtic Frost, Bathory, and some traditional Epic/Doom metal bands. I listened to this album twice before writing this review, and to be honest it didn't grow on me that much. Maybe it's because of the fantastic level that "Arctic thunder" (or it's predecessor!) set that I can't really enjoy this. Also, I think that Ted's vocals are fading a little since "The Underground Resistance". I wish that there were some cool vocal performances by Fenriz too, as his vocal performances suit this kind of music better in my opinion. Also, i kind of don't get why they are doing this much Doom-y stuff with Darkthrone when Fenriz already experimented with every sort of Doom Metal in his side-project, "Isengard".

It's another great old school album, but the repetition and overlong songwriting sometimes fails to create the epic soundscape and becomes a bit boring. The previous two albums had a better balanced mixture of doom-y passages and faster parts. Anyway, it's only my humble opinion. I still respect the guys for what they are doing and for what they represent. HAIL DARKTHRONE!

Not bad, pleasant to listen to, but ultimately somewhat forgettable. Most Darkthrone albums have a couple of things that grab you by the balls so you don't forget about them easily, this has none such ball-grabbing that I could notice.

i agree to some extent!
i think this album has the same problem as the Old Star tbh. that was a fantastic album as well but i can't put my finger on the reason why i don't listen to it that often (in fact, i've just listened to it once!)
whenever i want to listen to some recent Darkthrone, onlt Arctic Thunder comes to my mind. that's got the Darkthrone magic i think. even though it's not that far off from these last two albums.
in my opinion, the problem might be caused by the fact that they are to hung up on making a good Concept album rather than making a kickass album!
the 3rd song (especially the keyboard-driven part) grabbed my balls on the first listen but on the second run it sort of let go haha

Darkthrone in the news