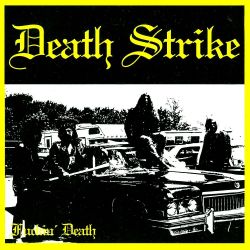 Many people take Death Strike as a Death Metal band, but it's simply just not accurate! (I mean, it's 1985 man! What do you expect?!). Even though the riffs have lots in common with the late 80s Death Metal bands, factors like the incredible vocals easily put this on the Old School "

Hellhammer worshippers" category! They almost sound as if a mad serial killer sang them! They are also stenched in reverb which makes it even more obscure. In short, I can't praise the vocals well enough. You need to hear em!

The first 4 songs are lifted from the 1985 demo without any altering and they are easily the highlights of the album. The remaining 4 songs sound more doom-y, and the vocals on those songs are for some reason not as angry or aggressive. Another thing about the first 4 tracks are the drums. Yes, they are incredibly primitive, but the high sound of the double bass in the mix is one of the most iconic early 80s drum sounds!

The first song is probably the angriest song here. The vocals and the lyrics kinda sound like old school crossover bands, but I have to say I freakin' love it! The second and third songs are incredibly heavy and primitive. "Re-Entry and Destruction" is probably the most obviously Hellhammer-inspired song here (in second place would be the doomy closer "Remorseless Poison"). "The Final Countdown" is the weirdest song here! It starts with a weird acoustic intro and then jumps into Black Sabbath worship! (Especially the Sabotage Era). "Man Killed America / Embryonic Misconceptions" is the punkiest song on offer here (as you can guess from it's title!). It has a very interesting breakdown part towards the middle, which is quite memorable.

One of the BIGGEST and most memorable aspects of this album must be the incredible solos! I've rarely encountered fast scorching solos like this which manage to be remotely melodic the way they do here! ([Coughs] Ahem! Another shoutout to Kerry King!)

Overall, this album is one of the coolest first wave Black Metal albums ever (well, mostly the first 4 tracks!). Anyone who likes old school

Hellhammer cannot possibly miss this masterpiece. The last 4 songs are a bit more straight, but the first 4 tracks are criminally underrated!

No comments yet.
Leave a comment
for 'Death Strike - Fuckin' Death LP'