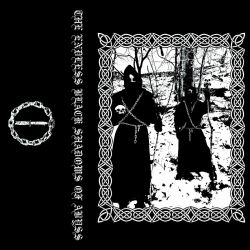 The Endless Black Shadows of Abyss

Symphonic Black Metal Is NOT Dead!

Symphonic Black Metal is arguably the biggest divisive little moment in Black Metal history. The veterans and the fans have always been telling us that this progression with added keyboards and added atmosphere was unnecessary, and that they didn't "take Black Metal further" as they claimed!

As for me, I think some of the earlier symphonic works were very nice, but after some time they took it to a ridiculous level! With the exception of a handful releases, such as Emperor's first two albums and the first two Dimmu Borgir albums, the majority of Symphonic Black Metal albums from the 90s sucked. But in that pile, there were some bands such as Obtained Enslavement that mated the Symphonic formula with very raw Black Metal (especially on their 2nd album, "Witchcraft"). This album sort of goes in that direction, rather than the fancy Emperor or Limbonic Art way of doing it!

This album is incredibly short in length (this is probably its only problem, by the way). The first and last songs are minimal intro and outro songs, and they do the job of creating an atmosphere just fine. The main songs are all around the 5 minute length, and they don't go on for too long.

The production is incredibly lo-fi and raw, and the mix is pretty much spot on, although it would have been better if the double bass were a bit higher in the mix, but that's not a big issue. The guitar sound is incredibly nude and unpolished, and creates a very dark and old school atmosphere. The riffs are the same usual tremolo picked high-paced riffs typical of the 90s.

The keyboards are flawless though. They are not too intrusive or high in the mix, they are there to just add to the atmosphere not to BE the creator of atmosphere!

Overall, this is one of the best Symphonic Black Metal albums of recent times, and by far the best symphonic release from 2020. If it wasn't so goddamn short I would have rated it higher, but let's hope to see another release from them soon!

0 Comments
for 'Deogen - The Endless Black Shadows of Abyss'

No comments yet.
Leave a comment
for 'Deogen - The Endless Black Shadows of Abyss'

Leave a comment
for 'Deogen - The Endless Black Shadows of Abyss'