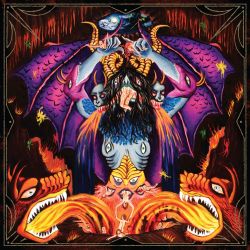 Satan Spits on Children of Light

As I mentioned before, recently there has been a growing wave of American musicians who go for the old school tongue-in-cheek vibe with Black Metal. As we know, this trend started with the legendary

Venom (and so far, no one did it with the same impact!). This band mixes the old school sound of Venom and other less occult-driven NWOBHM bands with the crossover punk bands of the 80s. After releasing an excellent demo and an even more excellent EP, they finally released their debut full-length back in 2019.

The guitar tone is STENCHED in reverb like you wouldn't believe it! I say it again: it sounds more 80s than the actual 80s bands! The drums are purely D-Beat oriented and punky in the traditional

Motorhead fashion! The cymbals are high as fuck in the mix, which gives a sort of aggressive "Fuck You" vibe to the album!

You may find this old school Metal / Punk mash-up pretty conventional, but I don't think this band does anything normal here! The overall sound of the album sounds like a fucked up mixture of old school

Discharge. I can also sense a certain Gothic Rock vibe on some of the songs here (most notably the intro song!). Now, if you ask me, that's kind of a unique approach to a metal album!

The vocals are also in the upmost traditional fashion and consist of growls drowned in tons of reverb! This overall focus on reverb (both on the vocals and the guitars) creates a genuinely evil atmosphere which I adore. Generally though, the vocals give an old school Speed Metal vibe similar to Venom and Motorhead.

If I had to pick just one major style to categorize this, I would probably suggest that it does lean on towards the Punk side of their Metal / Punk style.

Another nice aspect of this album that is worth mentioning is the very cool album artwork on showcase! That's how it should be. Lots of myth and legend creating a sense of mystery. This mysterious vibe continues on some of the songs (like the second part of the amazing "Desperate Shadow").

My favorite song must be the 80s classic metal throwback of "Her Thirsty Whip".

Overall, this album is one of the most unique mixtures I've encountered in the context of old school Black Metal. The guitar tone is enough to make you fall in love with this. Modern Black Metal fans probably wouldn't get this, but if you're into the 80s stuff, you just cannot stop yourself from falling in love with this motherfucker!

0 Comments
for 'Devil Master - Satan Spits on Children of Light'