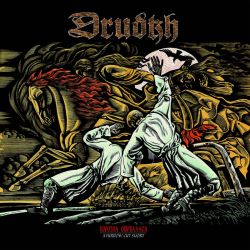 A great throwback album slightly ruined by TOO MUCH repetition.

The early Drudkh albums (up until Microcosmos) are simply Magical to me. The same way that early Burzum albums are Magical beyond description. They blended tons of emotions in one package in an outstanding way; lots of sorrow and melancholy mixed with lots of anger and national pride. However; the two albums that came out after Microcosmos were less successful (awful actually!). To me they sounded almost like a modern post-Black Metal album with some old school moments thrown in for good measure! With this album though, Drudkh went back to their roots (or at least tried!) (also, the previous album was kind of a going-back-to-the-roots album, but it wasn't a huge success, so I'll ignore that!).

The overall headlines with the first listen are very promising. When I heard the riff that started on 1:00 of the first song, I yelled "YEAH, Drudkh is back bitch!". It's definitely one of the best Drudkh riffs ever (easily Top 5!). This said, after some repetition of that riff, the riffs started to change into less memorable ones. I know that Atmospheric Black Metal is not about catchiness or the memorability of riffs, but the overall experience is that earlier Drudkh albums managed this feat without sounding uninspired or chaotic. Even the most simple riffs were pretty engaging.

I have to say, the remaining songs suffer from this minor issue as well. They have some extremely Drudkh-y vibes to them, but thanks to lots of repetition or uninspired filler riffs, I started to fall out of the trance that Drudkh creates!

The keyboards are much better than the previous couple of albums, and create a very nostalgic feeling. In some ways, the keyboard layers reminded me of "Blood in our wells" (which is incidentally my favorite Drudkh album!).

As for the production, Drudkh never had a consistent production quality over the years, but I'm glad to say that this production is a huge improvement compared with the previous couple of albums (and better than some albums from the golden era of band like "The Swan road" or "Estrangement"). Though, it does somehow lack the magical atmosphere of the old school Drudkh albums (in my opinion, it has something to do with the drums. They sound quite over the top as the mixing goes. They also sound disharmonious and out of time at some points).

One of the major things that's missing is the lack of folk instruments and folk-inspired guitar solos (except for song #2 perhaps). They seem to have gone for more of a traditional Black Metal approach (which reduces the uniqueness if you ask me).

As for the vocals; they don't have the agony of the original albums, but technically there is nothing wrong with the way they are performed.

The guitar sound is much more dense and heavy than the previous albums (it reminds me again of "Blood in our Wells").

The lyrics are, as always, incredibly touching and deep. The songwriting is not that perfect, though. The songs were written over the course of 3-4 years, and it kinda shows, since the songs sound a bit disharmonious with each other.

Overall, this album is not like the glory days, but it's a huge improvement compared to the previous two albums, and a triumphant return to their old school form. Its major issue is the overlong songs with too much repetition.

Do you know who the band Drudkh is? I unsurprisingly doubt it. Ukraine is not a country where heavy metal thrives like in the UK or Scandinavia, and Drudkh is not an outspoken band that draws attention to them. They play no live shows, have no political agenda and support no extreme or violent beliefs. In a country where politics and violence unfortunately sustain, Drudkh have the potential to become underground legends however their public coy has led them to become more of a cult name in the black metal world.

i'm starting to be obsessed with the riff that starts on the 00:55 of the first track. it might be my fav drudkh riff! Expressionism at it's finest.

Drudkh in the news