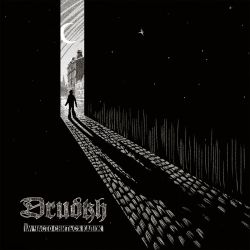 One more review is needed in order to make this album eligible for ranked awards.
81%

Is it a bad album? No! Does it lack the magic? Yes.

Unlike the previous Drudkh album, which was a throwback to the old school Drudkh sound, this, their latest, does seem to be going in a completely different direction. It's much shorter than the previous one, and the riffs are MUCH more traditional tremolo-picking rather than Drudkh's unique expressional approach that we know and love. The drums are much lower in the mix and rely more on fast double bass drumming (which is one of the weaknesses of this album, to be honest).

Now at this point, I would have liked to write a detailed description of the songs and musicianship like the previous review, but unfortunately I can't come up with much to say about this album. It's not a bad album in any way, but it's a tad bit mediocre! They have tried to copy their own sound in more modern ways. On albums like this, I usually can't come up with a lot to say so I'll keep it short!

For a kick off, the vocals are nowhere near as good as the ones on the previous efforts. They seem to be lacking the character and agony of their earlier performances. There is a little less melancholy in his voice!

Ugh! I can't find the words. It's just a very weird album. Even the artwork is weird and different than anything they've ever put up. It looks like an Alternative / Post-rock / Post-metal album cover!

The guitar work is not that memorable to be honest. The production is, again, weird! Everything sounds quite well-performed, but the overall sound is not that pleasant somehow.

As I mentioned earlier, the songwriting is much shorter and crisper than before, but I gotta say, I prefer the overlong and repetitive stuff!

Don't get me wrong, I'm not trying to shit on this album! It's a very decent album, but it's not Drudkh!
Overall, I think this is a very competent album, but it does lack the magic of early Drudkh. This band has been on the decline since Microcosmos, but this one is one of the weakest for me. It doesn't sound unique and epic as it used to be. Most of that is because of the lack of their Folk influences, in my opinion.