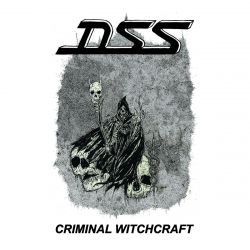 Recently, as a result of a recommendation, I came across a compilation album called "New Jersey Metal Attack Vol. 1" which was a split between some unknown bands from NJ. Although I liked the overall album, one of the songs there really caught my attention. That song was "Deep Space Sorcerer" by DSS. I hadn't encounterd this level of Old School-ness in a long way. It sounded like a Punk-y version of

Motorhead with some satanic spotting! (Sound familiar? Yep! The Mighty

Venom). After this experience I decided to check this band as soon as possible. So far they have only released 3 demos filled with really short, kickass Blackened Speed metal anthems.

This situation reminds me of the legendary beginning of

Bathory. As many of you will know, Bathory put two songs in a compilation/split album after one of the bands decided to not take part in it. Legend has it that most of the fans just asked about Bathory instead of the other bands. Ironically, the name of this compilation album is very much inspired by that split album from '84 (Scandinavian Metal Attack). I kinda felt like those boys who discovered Bathory in that split album!

However; this band doesn't resemble a Bathory clone for me! It almost sounds like the early Bathory stuff without the Doom-y Black Sabbath Worship and more focus on Speed/Thrash riffs inspired by German Speed Metal acts and early Venom clones such as

Sodom. The riffs are the biggest punch-in-the-face factor for me. They are incredibly catchy and badass (especially track 4).

The vocals are a bastard child of Lemmy and Cronos! The same kind of Cronos growls with some of the sense of Melody that Lemmy possessed (it works incredibly well with the riffs. Well, apart from the WASP cover, which doesn't really work for me!).

The production is FANTASTICCCC. Not too raw nor too polished. It almost feels like they invented a time machine and went to 1983! It sounds authentically old school. The drums are mostly on the D-beat mode, and that's fine by me. It suits the atmosphere of the album very well.

Highlights? As I mentioned before, I'm not a big fan of the WASP cover song, but I worship the rest of this exceptional release. I would probably choose "Under His Spell", because of that insane riff.

Overall, a refreshing throwback album. I can't wait for their full-length.