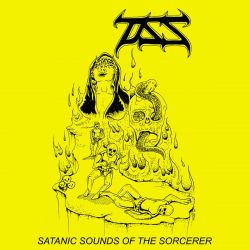 Satanic Sounds of the Sorcerer

At this point, they are just turning into a bunch of tease people!

The latest demo by the NJ based Blackened Speed Metal worshippers DSS is by far the most accomplished one. After the somewhat weird production on their previous demo, they perfected their sound on this exceptional release.

The riffs still sound like Kreator worship, but a tad bit more mature (and straight TBH!) but thanks to the huge amount of melodic solos, it doesn't feel boring at all!

There aren't that many changes compared with the previous releases (and not that many songs!) so let's not get into too much detail.

The drumming is marginally improved compared with the previous demo (which is a relief), and the bass sounds less fancy. Other than that, there are not that many changes on the rhythm section. The vocals are just fine as well (with a little more Tom G. Warrior attitudes added on top).

Overall, another great throwback album, but with a huge focus on melody this time. It's a bit too short to call it their best work, but it's by far the most engaging and interesting release by them. I can't recommend this band and these three demos well enough. I can't wait for their debut full-length!

0 Comments
for 'DSS - Satanic Sounds of the Sorcerer'

No comments yet.
Leave a comment
for 'DSS - Satanic Sounds of the Sorcerer'

Leave a comment
for 'DSS - Satanic Sounds of the Sorcerer'