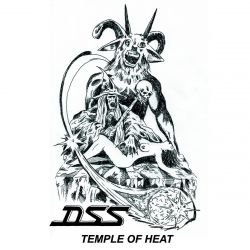 A year after their exceptional enterance into the world of underground metal, DSS released their second demo, titled "Temple of Heat". It continues the same trajectory as the previous effort, with some minor differences.

Firstly, the production is a tad bit too old school on this album. It almost feels like they were trying too hard to achieve a certain 80s sound and they overdid it! I'm not sure which production they were aiming for, but this mostly reminds me of the first Venom album (or even the first Venom demo!). This said, there is nothing wrong with the mixing and production. In some aspects it's actually better than the previous demo. The bass is actually higher in the mix and more audible (especially on songs like "Black Magic Steel"). Speaking of bass, the bass lines and bass intros and outros sound ridiculously similar to Cronos' bass playing on early Venom albums!

The riffs are in the same vein as their previous effort though (THANKFULLY!). The same kind of old school/Catchy Speed/Thrash riffs. There is bit more

Kreator vibe going on, though. On songs like "Fast Metal Fireball" and "Turbolust" you can easily sense some inspirations spawned from the "Flag of Hate" era of Kreator.

The vocals are pretty much the same as before though, and even though they sound quite blurry at some points, I still quite like them. Another difference with the first demo is the number of the tracks and song lengths. The intro and outro pieces feel kinda irrelevant to be honest, but overall, I like all the songs.

The only slight drawback with this album is the rather out-of-time and disjointed drumming.

Overall, just like the previous effort, a fantastic throwback release recommended for early

0 Comments
for 'DSS - Temple of Heat'

No comments yet.
Leave a comment
for 'DSS - Temple of Heat'