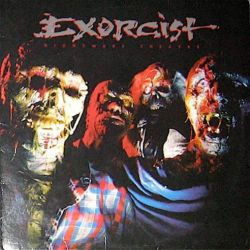 Good old days when Worshipping Venom, the devil and horror movies were cool!

You may have heard some stuff about an 80s phenomenon called simply “fake bands”. Essentially Some labels made some bands up that did not actually exist! the members were usually assembled in a manner which is a bit similar to the whole concept of "supergroup" but with a different attribute: all the guys belong to a single legendary band rather than different legendary bands. For example, in order to create this particular “fake band”, the label gathered musicians from the legendary act

Virgin Steele. This concept of creating pseudo-bands for purely commercial reasons may seem strange to you but at least in the case of EXORCIST its resulting product was not a slouch at all. In fact, in my opinion it surpassed all of

Venom's albums by miles. And as we know, surpassing the band that you tried to emulate is a rare and badass treat!

First of all, i must emphasize the fact that In order to appreciate this album with pleasure, you should get into the mindset of the Metal community in the mid-80s. If you look at this album with a 2022 mindset this will be at most a retro, cliche act that is forgotten in the dust and some old blogspots that were active until 2009! just imagine yourself in it's context of its creation for a second: it's 1985-1986; the early phase of the first Extreme metal wave. Thrash metal is Becoming mainstream and reaching it's peak. The Godfathers of the Genre Venom are going downhill quality-wise but they are insanely popular. A few bands that tried the Venom formula in 1982-1983 are already changing their direction. Bands like

Lest's start with The Vocals;
They are one of the biggest pros for me about this album and they remind me of a combination of some GODS from legendary bands. You can defenitely hear a lot of Jeff Beccera from the hugely important Black/Death Pioneers Possessed. At some points there is a hint of raspy vocals that can only mean QUORTHON from "you know which band"! and oh yeah, obviously Cronos from the band "Fuck off if you don't know Cronos' band!" overall, they sound Hoarse, Raw and demon-like.

As for the Guitars;
The riffs are unforgettable and badass! they turn these "Cliche Speed Metal songs disguised in horror movie theme songs" into ANTHEMS! just listen to songs like 'Burnt Offerings', 'Possessed', 'Call for the Exorcist' and 'Riding to Hell' to understand what i mean. You can hear a lot of the great uncertainty of 1985 Black/Thrash where they didn't have a formula so they improvised a lot from what they already heard up to that point.

Some songs start with or ends with a abrubt, wild solo that can only be attributed to their exposure to the first Slayer album! usually after hearing those parts a classy shout of "HELL YEAH" is guranteed no matter who you might be!

The Production is just what you might expect from 1985. Not as clean and expensive sounding as 1986 and not as raw sounding as 1983 1984. The perfect middle ground. You can hear everything clearly which is more than enough for mid 80s albums.

As for the keyboards and other sound effects;
The many keyboard intros and samples are particularly badass in the overall sound, which emphasize the horror atmosphere and most of the times makes you think of

Alot of these compliments about the good performances comes from that "pseudo-band" notion since the musicians that we are speaking about are not some 13 year old guys who just moved their house to the woods and feel like creating Black metal! their previous experience has a positive effect on the brutality of the songs.

I know that i stated that you should not stare at this albums shivering beauty with a 2022 set of eyes but come to think of it, you can enjoy it even with that! Today "Nightmare Theater" is even more compelling than it was in 1985, because the charming retro factor enhances the album. Anyone who has a heart for Proto Black/Death Metal will feel right at home here, because the journey back in time to the early days of the subgenre is a lot of fun and the badass imagery and lyrics immediately put a smile on the listener's face!

Overall, this band and this, their only effort, is an album bursting with clichés, but the quality is so high that you almost forget all that notion and put it above most of the Godly records from that period of time. The notion that it was a commercial product rather than a rebellious act or work of art and that it was created at the drawing board is thus unimportant because it offers high-quality songs. The end!
If you like horror movies, early to mid 80s Black/Thrash/Death then look no further than this overlooked masterpiece. Sayonara

Will add this to the Classic Albums during next update