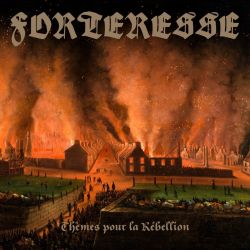 A pure masterpiece, this is what this album is. I have never heard something like this before. The first time I listened to this, I was shocked. I was like, how is it possible to make something this good? In my opinion, this is the best Black Metal album ever made, or a least in the Top 3, and I'm going to explain to you why I love this album that much.

I'm going to start with the good points. The riffs are indescribably good, it's insane. On this album, Forteresse use something often used in the the Black Metal scene to make their melody: one guitar plays a low riff, and the other plays a high one, but no-one does it better than them on this album. Nothing equals this masterpiece.

Another strong point are the vocals. Normally, I don't really like Black Metal vocals in my language, even if I love my language, because personally I think that French vocals in Black Metal do not fit, but on this album, it's perfect. With some sovereignist and nationalist lyrics (not national-socialist but nationalist, big difference), the voice of Athros can't be more awesome. If you visualize music like me, you can see the battle that forged Québec, and the Patriots fighting the English, and it's an indescribable sensation for a nationalist. Even if you're not a Quebecer and you probably don't give a fuck about Québec's independance, I'm sure that these lyrics will touch you a bit.

Another point is the length of this masterpiece. The album is not too long, not too short, so you don't feel bored at the end, and you don't feel like the album end to soon.

Honestly, I can't find any bad points on this album. Everything is so perfect. If I am really severe, at the end it has become a bit repetitive, but this is so fucking good that even if it's repetitive, I don't feel bored.

To conclude this review, I really recommend this, you have to listen to it at least once. And if you don't want to listen to the entire album, because some people prefer to just listen to some songs, I really recommend the first four songs, especially the song "Là Où Nous Allons" and "Par la Bouche de Mes Canons". The first song is an intro, but listen to it, the song that follows is better if you listen to the intro first. I really hope you love this as much as I do. Hail Forteresse and hail Québec Black Metal!

A punchier, more straightforward release by one of the Canadian Old Guards.

Years ago, I came across this band's debut album, "Métal Noir Québécois", and I absolutely loved the old school 90s sound on it. I especially liked the way they created this old school high-pitched and intense tremolo-picked riffing, which has an unusual calming effect! (thanks in most part to the raw, blizzardy production).

However; after a couple more listens, I found it quite derivative, and unoriginal. It was 90s Norwegian Black Metal to its core! This said, I was a fan of the 90s throwback style present on that album. Then I listened to some of the albums and EPs that came after it, and they were all pretty much mediocre and boring Atmospheric Black Metal at best. After that, I didn't have the energy or the enthusiasm to check out their latter output. However; after seeing so many people posting about this 2016 effort on Instagram and also seeing its high-ratings on several reviews, I decided to check this one out.

And on the outside, it does look like a major improvement compared with their first album (I'm not gonna compare this album with anything other than the first album, since I don't find any of the latter day output all that relevant!).

For a kick off, the drumming sounds much more organic compared with the drumming on "Métal Noir Québécois". The drumming on that album almost sounded like a drum machine (maybe it was, I don't know for sure!). However; on the faster parts, the drums can't stay in time with the really high-pitched fast riffs, and sound quite loose. Although the drum sound on "Métal Noir Québécois" was quite plastic-y and artificial, it was perfectly in time with the really fast tunes (like on my favorite song there, "La Flamme et le Lys").

The production is much more cleaner on this album. That said, this doesn't actually ruin the atmosphere as you would expect. It's just that the blizzard-y, cold and raw atmosphere of the previous efforts are replaced with a quite unique type of atmosphere which is not that similar to the Norwegian stereotypes (the first album had a very blurry atmosphere, similar to "Hvis Lyset Tar Oss" by

The highlight of the album (and this band in general) has always been their great guitar sound, which always reminded me of Infernus' guitar work in the early days of

Gorgoroth, especially the first album in 1994 (check out the song "Mooneskyggens Slave" to see what I mean!). This band has the same sort of layered guitar work as the aforementioned Norwegian legends. The riffs on this album are much more catchy compared with the previous efforts, but overall, this album has a bit of a Pagan Black Metal vibe going on (especially on songs like "Le Sang des Héros"), which is quite different from the repetitive Ambient/Atmospheric approach on previous efforts.

This change in direction may sound a bit Folk-y but this album actually alludes to that type of folklore stereotypes. For example, unlike the first album, where every song had a violin intro by traditional French composers, the songs on this album don't feature any folk instruments as such. The only traditional parts are the intro and outro, which sound quite modern compared with the stuff from the first album. This change in direction also means that the songs are not as long or as repetitive as they were on the previous stuff (which, to be honest, is a good thing, as that was a major issue with most of this bands releases!).

As for the vocals, this band had always had a very charming, traditional Black Metal vocal style which I quite liked. It's much of the same here, but with less raspy moments!

As I mentioned before, the songwriting is much more different here, and there are some slower, mid-paced moments too (unlike the first album, which never slowed down one bit!). However; some of these slower moments kill the momentum of the album for me.

I've read about this album's nice theme and lyrics in countless reviews, but as I don't understand French and don't really know about the Rebellion of 1837, I'll shut my mouth about that!

Overall, this is probably this band's most well-performed and organic album to date, and it seems to be a major improvement compared with the previous albums and EPs. I wish that they would have made more parts with that Pagan vibe, like on the fifth track. The album does sound shorter, more aggressive and punchier than before, but it doesn't have the charming, cold, blizzard-y and hypnotic atmosphere of the band's earlier releases. Recommended.

No comments yet.
Leave a comment
for 'Forteresse - Thèmes pour la Rébellion'