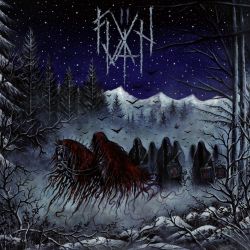 Nothing wrong with it, but it lacks something that you can't really put your finger on!

I was a big fan of the first Àrsaidh album, and the 2016 Saor album was a fine album indeed. I didn't much dig the first Fuath album though, it was too "melodic" for my taste!

After seeing the review for this second album here, I listened to it today, and even though we had two reviews here that sort of praised the production of this album, I have to say I didn't find the production that perfect! The drums are way over the top on the mix. This said, the overall guitar sound is pretty nice.

I think that this album's only problem is just the fact that I don't find it that memorable. This has nothing to do with the lowered priority of keyboards, or the vocals, or anything. No, I think the only major problem with this, is pretty much the same problem with most modern Black Metal albums (especially Atmospheric Black Metal bands), that is the riffs, which are not memorable at all. Sure, there is nothing wrong with them, but they sound a bit like recycled Norwegian Black Metal riffs from the 90s!

And I think the cause of this similarity and non-memorable Mayhem rip-off is outlined nicely by the previous review done for this album; I personally find that quote from the label's blurb extremely lame! Even the mentioned Darkthrone have moved on from that Norwegian sound for a reason! It's been done and that's that! Just because it sold lots of copies doesn't mean that you should do something in that vein!

Statements and motives from the labels like this made the 90s Death Metal scene boring! It made late 90s/2000s Norwegian/Swedish Black Metal scene boring! (even made Metallica Boring:)). I hate the phrase "sell-out", but statements like this do actually smell like "sell-out"! Àrsaidh was incredibly original, and even Saor was quite unique. If the case is like the label's statement, then I'm afraid we have another victim for big corporation's hypocrisy! When Record labels and big corporations stick their nose in the produced music, it becomes a real tragedy for a movement.

Overall, I don't think this is a bad album at all, and it's not that generic either. If you want old school 90s Norsk Black Metal worship this is excellent, but even with that in mind the clear production doesn't create the cold, frostbitten atmosphere that we loved about those days. Anyway, a good album (better than the previous album) but quite wet still!

This said, I think the last song was something heading towards the right direction.

An unbalanced diet of frostdemons and snowcones

Fuath is another solo project from the same man behind Saor (formerly Àrsaidh), a name which has become quite prominent in recent years in atmospheric-folky Black Metal circles, and deservedly so.

This direct relation means that I invariably made comparisons between the two projects while listening to Fuath's second album. I also assume that anyone reading this review will have some degree of curiosity as to how the two projects compare as well, so we should get this out of the way first.

In terms of general atmosphere, Fuath is very much like Saor, except with the positive, autumnal pagan spirits removed, and replaced entirely by sinister, godless winter spirits instead. This contrast in atmosphere is sufficient to differentiate between the two (and justify the existence of Fuath in the first place), but there are also some additional differences in the execution, namely the vocals, the style of riffs, and small nuances in the drumming. That said, I haven't listened to an awful lot of Saor either, so forgive me if I fucked up this comparison. So, with that out of the way, we can begin.

The album refrains from any unnecessary intros and jumps straight into some heavy guitar work, however my immediate first impressions of the album were lukewarm. Specifically, I was confused with how muddy the production sounded during the opening riffs, and how excessive the presence of the bass felt. This didn't last long, and disappeared as the song evolved, however it is something that did pop up a few more times over the course of the album, and was slightly distracting each time it did.

Of course, when things aren't muddy, the production and mixing that has been done here is tremendous, and the highlights for me, as is often the case, are the vocals. "Fuath" is Gaelic for "hatred", and the way the vocals are mixed conveys this feeling brilliantly. They are raspy, cold, powerful, and not overused. There are also a couple of parts with ethereal clean singing used to great effect, and I actually wish they would have been used more often.

The aforementioned embellishments in the drumming are a small detail, but make a big difference. As for the guitars themselves, they are good. Not exceptional nor remarkable, but they get the job done, and there are some very juicy riffs and intricate lead parts to be found in this album. This is atmospheric Black Metal that you can bang your head to. At least some of the time. I should also mention the keyboards, or rather, their absence. They are used a lot less than has generally become the "industry standard" for atmospheric Black Metal of this style, and I think that is a positive aspect of this album. It does not try to be too dreamy, and relies instead on the traditional in-your-face approach.

However, this approach is a double-edged sword, and this is where I feel the one notable downfall of the album becomes apparent. I will elaborate, but first, allow me to quote from the label's promotional blurb:

Taking inspiration from arguably black metal’s most fertile and explosive period — the early to mid-1990s — the music channels the unrelenting tenor and iciness of forebears Darkthrone and Mayhem, as well as the mystery and atmosphere of bands like Windir.


So, unfortunately, this is nothing but empty marketing drivel, courtesy of Season of Mist. Windir? Fair enough, that will pass, but "Fuarth - II" does not sound even remotely like the early 90s.

Yes, I know, it's the traditional corporate hype that we are all pretty much immune to by now. In fact, I wouldn't even have given it a second thought, if it weren't for the fact that it caught my eye and made me realize precisely what "Fuarth - II" is lacking, or rather, fails to execute.

You see, our beloved Norwegian pioneers were able to effortlessly conjure up portals to ancient realms, pierce your mind with timeless spears of ice, and drag you for small eternities across vast windswept wastelands (or some shit like that, you get the idea), thanks in no small part to the extremely raw production they used, combined with frequent use of completely organic, hypnotic repetition.

In the case of "Fuarth - II", however, the level of production is not even in the same ballpark as that of the early 90s. Quite the contrary, the production is modern, even polished. As I said above, I like the production on this album, however this unfortunately has resulted in the album's multiple attempts at hypnotic repetition falling flat, with certain repetitive passages ultimately feeling forced or misplaced, and leaving you fully conscious and self-aware for their duration.

It is not a deal-breaker. This is still a very enjoyable album, and it is still captivating, for the most part. I just feel that some potential was wasted here, and that perhaps it could have benefited from a slightly less in-your-face approach after all. Nothing major, maybe building a bit more on the presence of the great clean vocals, or enhancing the long guitar passages with some more prominent use of keyboards or other elements.

I understand that Andy Marshall perhaps created Fuath with the intent of departing from the more comfortable confines of Saor's worlds and wanted to create something a bit colder and darker, but I think he hasn't quite found the perfect balance for achieving this, yet...

However, he has the experience, and potential, and I think that the third Fuath album could be something quite special indeed.

Imperator on 31st May, 2021
Head Admin - Lycanthropia.net - 2 reviews
"The human mind is much given to the thrilling exercise of leaping across chasms as if they were not there." - H. D. F. Kitto

Another masterpiece for this year, and it is made by Andy, from Saor!

If you love Soar, then you should listen to this album! Fuath is the second project of the person who is behind Soar, namely Andy, from the UK.

This album has dynamic drums, melancholic riffs and atmospheric vocals that don't cover the instrumental parts. Sometimes the riffs are getting better, and faster. It is an Atmospheric Black Metal album not for depression or sad moments, but for when you want to listen to something powerful, to rise you!

The sound quality is perfect for this year, not shitty like 90s Black Metal demos. In the last track you can listen to the bass, and how great Andy plays it!

My favorite tracks: ALL OF THEM!

No comments yet.
Leave a comment
for 'Fuath (GBR) - II'