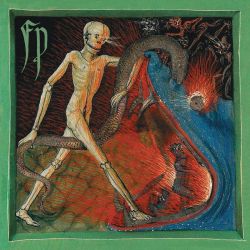 The latest offering from New York's Funereal Presence is a massive improvement over the band's previous efforts. On this release they mixed the 80s Thrash and classical metal riffs and leads with some primitive vocal performances. One can find some Neoclassical influences on the solo department.

The drumming and bass work is reminiscent of old school Tormentor (Hungary), or old school Eastern Bloc bands (such as Root from Czechia). This band has the same drummer as another fantastic USBM project called Negative plane.

Even though some of the arrangements are authentically progressive, the whole feeling of the album is very much old school 80s Black Metal. One of the strengths of this album is it's masterful songwriting. The songs are extremely well thought of, and you rarely feel the need to skip a track as they are fantastically synced together.

The biggest strength is this album's production. If you show this to someone without knowing it's artist, they probably would think it was a band from the 80s! It may seem easy, but capturing the 80s production without sounding cheesy and amateurish is very difficult. This album manages to sound like the golden era of metal without copying the ideas too obviously.

The highlight of the album for me is "Wherein a Messenger of the Devil Appears". What a fantastic song from start to finish!

Overall, this album is one of the best albums of recent times, and you should definitely check it out.

PeaceThroughAnarchy on 18th May, 2021
Trusted User - Lycanthropia.net - 155 reviews
Bang That Head That Doesn't Bang to Sarcofago.