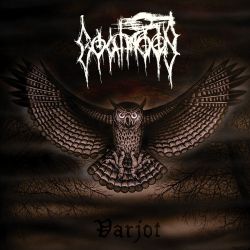 I'm normally not the biggest fan of pagan black metal, but when you talk about Goatmoon, it's just another game. This review, as you can see, will be about one of the greatest pagan black metal band and one of his best album.


Firstly, the intro of the first song. You know, this is the thing that NSBM have that normal band doesn't have sadly, the immensity of emotion transmitted in the music more than any other type of bands. And that's why i do not understand why people are privating their self to listen to NSBM m, why should we private ourself of this kind of masterpiece because the guy who is doing it is a little nazi boy in lack of attention, explain me why. Even if the NS valor are against all my convictions, i think we have to admit that they give the artist a certain power in his music. Instead of just saying (like Cannibal Corpse) slash his throat and rape her dead body, they think it, a thing that his of course immoral and disgusting, but real, and you hear it in the music.

This said, let's return to the good point. The riff on this album are pretty good, not extraordinary but they stay really good, clean riff above all like in the song ''Storming Through White Light'' that i just talk about. Also, all the pagan influence in the songs is magical. Listening to this album while taking a walk in the wood winter while it's snowing is one of the best feeling. Another good point is the voice of Blackgoat, he have one of the best voice in black metal, in the top 10-15 IMO. He also have a great clean voice that we can hear in the song ''Valley of Shadows''. The drums are pretty good too, they are simple but they do the job perfectly. Another strong point that i really like is that the song are variating of kind, in ''Valley of Shadows'' we have a full of emotion chorus and just after, in ''Wolven Empress'', we have a hateful guitar riff that remind me of the first Goatmoon album ''Death and Dishonor''. But not for long, because in the same song there's a flut part (if am right, not a specialist) who comes to add this pagan atmosphere again. And after we have the great ''Abomination of Winter'' that is for me clearly one of the best song of this album.


This album have some little bad point but not a lot honestly, because the album is not very long so we can't become boring other than if of course you don't like the album. But, only 34 minutes, it's pretty short, i feel like Blackgoat could easily have make the album a bit longer, but at the same time, it's better to cut the album short than stretch it by putting shitty song at the end. Also, i sometimes feel that the chorus are pretty similar, but the super music who accompanies it hide it a bit.


To end this review, i really recommend this album to be listen in the wood while taking a walk, it's an insane feeling, better if you have snow but this is not everyone who have 4 foot of snow in is driveway hahahA o, hope you enjoy it and have a good day.