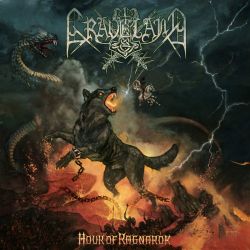 Submitted by PeaceThroughAnarchy
1 user has collected this album

Graveland has been one of the most consistant names in the Pagan Black Metal scenes of the 90s and 2000s. Whether it's the early, raw efforts of the demo days and the first album, or the more epic subsequent albums that followed. In my personal opinion they are the most successful band to capture the full essence and magic of the Viking era of

Bathory without any of the progressions that killed the Black Metal vibe altogether! And now, after a gap of almost 8 years, they are finally back with new material (the myriads of albums between the 2013 album and this one are re-recorded versions of older stuff rather than new material).

As always, Graveland refused drastic changes and stuck to their old formula, and you barely feel any progression! The drumming is pretty much the same old primitive Blood, Fire, Death galloping on most songs, and while they are tightly performed, the rather chaotic mixing (especially the extremely over-the-top keyboards!) makes them feel a bit weird.

The biggest problem that I see with this album is the lack of great epic riffs that I was used to with their earlier efforts. Maybe there are some great riffs underneath but thanks to the O>V>E>R>T>H>E>T>O>P keyboards you can't hear much of the guitars! I know that keyboards are a big part of Gravelands appeal, but this one is dangerously heading towards being a OST for an 80s Rape and Pillage style movie!

Come to think of it, actually there is a bit of progression compared with the previous stuff, and that is the promotion of the keyboards from a rhythm instrument to a full on lead instrument (which doesn't work well with Black Metal most of the time!).

All this said, there are some cracking tunes here. Most notably "Children of Hyperborea", "The Three Gifts of the Gods" and "Enlighted by the Wisdom of Runes". Although, even these songs are not that great thanks to too much keyboards interference!

Overall, this is far away from their top-shelf material, and didn't satisfy my expectations from them in any way. In my humble opinion, they should ditch some of the honey mead themes and focus more on the riffs because they are dangerously close to cheezy folk metal territory!

0 Comments
for 'Graveland - Hour of Ragnarok'

No comments yet.
Leave a comment
for 'Graveland - Hour of Ragnarok'

Graveland in the news