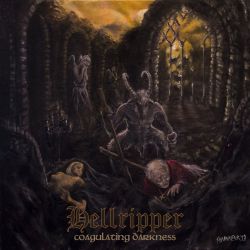 What is it with one man armies in the past few years? Seriously, how can one guy make something that will blow everything that legends like

Venom put out? This band is arguably one of the best One Man Bands of all time. Although the latest full-length seems to be more straight and mediocre, on this album this guy knew WTF he was doing!

Let's get straight to the point; The riffs here are Bombastic, Barbaric,... (we can write hundreds of words to describe the riffs that are full of Testosterone!) No doom-y moments (well, maybe apart from the title track), no ambient interludes or artsy, fancy experimental shit here. Just pure aggression from start to finish! Although this is supposed to be a Blackened Speed Metal act, some of the moments are Metal Militia level of Thrash-y!

The bass work on songs like the epic opener, "Bastard of Hades", is just fucking insane. Who knew that bass shredding was still a thing?! The guitar solos are by far the most authentically 80s aspect of this album. Holy goddamn fuck! Solos like the ones at the end of "Anneliese" or "Within the Everlasting Hellfire" are so scorchingly fast and dynamic that you will definitely put those parts on repeat constantly!

But let's not get away from the riffs that much! From the

Kreator Worship of "Within the Everlasting Hellfire", you cannot stop banging your head! Also, as another example of this album's full-on 80s hail, the album's closer, "Coagulating Darkness", has a bit of old school

Bathory vibe going on with its riff.

The vocals are pretty much a Quorthon rip-off! (especially his early raspy vocals on the debut

Bathory release). The drumming is also another rather "meh" aspect of this album. It's mostly just old school D-Beat stuff going on, which is nice, but a little more double bass work wouldn't have been bad!

Many people compare this band to the legendary

Midnight. Well, that's maybe, but this album mostly reminds me of the first

Bathory album. There is the same kind of punch in the face, satanic Speed Metal going on here too. It's also the same length as that album too, just 26 minutes long! This said, although the same formula applies here, thanks to much better production and a much faster riffs and solos, this is almost more memorable! Yeah, that's right, I said this! The world's most Bathory-Obsessed fucker! This similarity in length-shortage is probably this album's only drawback. It's just too short. You put it on repeat constantly!

No comments yet.
Leave a comment
for 'Hellripper - Coagulating Darkness'