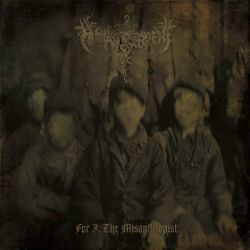 For I, the Misanthropist

Buy 'Human Serpent - For I, the Misanthropist' »
Buy album »

After releasing two stellar masterpieces back to back, the expectations from this band were raised to an almost unreachable high! I thought that they would either change their style and ruin their career (like so many other bands!), or worse, that they were going to plagiarize themselves and make the exact same album. I couldn't be more wrong! They managed to make it 3/3! (a trick that most bands can only dream of!)

The first thing you can get from this album is the fact that the vocals are a bit matured compared with the previous efforts, and are not as mad as before (although the vocals are still very unique, which is very rare these days!), but the rest of it is in the same vein (pissed off, angry, Hateful Misanthropic Black Metal!).

The first seconds of the first song alone, deserve high praise! Such a badass and intense way to start an album! By the way, this is my personal highlight of this album.

One of the most improved aspects of this album must be the drumming. They always had that perfect drum sound, but here it's at it's peak! (especially on songs like "Temple of All Despair")

Another strong point is the increased melody of the riffs. This band always had a melodic edge to them, but here it's at their highest level. Not a lot of bands manage to make a mixture of melodic, catchy, thick riffs (without sounding cheesy!), especially on the fifth track, "...to Son of Nothing".

Overall, I find this a bit inferior to the previous effort (but everything is inferior to that album!), however it's as perfect as it gets when it comes to pure, raw, misanthropic Black Metal. A MUST HAVE!

0 Comments
for 'Human Serpent - For I, the Misanthropist'

Leave a comment
for 'Human Serpent - For I, the Misanthropist'