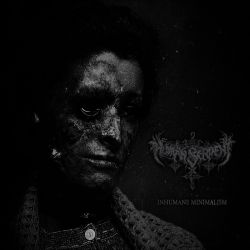 "Inhumane Minimalism" is the second album in Human Serpent's extremely consistent discography. Out of the four albums released to date, this is their best by far, their Magnum Opus! On this release they perfected the already fantastic atmosphere by making the production even better (almost perfect!).

The lyrical themes here (and on almost all Human Serpent releases) are Nihilisim, Misanthropy and hate towards religion. There are a lot of haunting chants and howls in the vocal department which give the album a lot of character and charm.

But the vocals, the lyrics, the insane drumming, are nothing compared to the insane riffage going here! The Guitar tone and performances sounds a lot like Infernus' early works on Gorgoroth's first three albums. The riffs are incredibly fast and intense, but they also convey a lot of melancholic feeling which, as I mentioned on previous reviews, is this band's main strength in my opinion. The guitar tone is very warm and insanely raw at the same time.

Another improvement over the previous album is the fact that the songs are even shorter than they were before. Human Serpent have always been straightforward with their attitude and songwriting, but none as intense and In-Your-Face as this badass MF! (this can be felt easily on songs like "Trees of Flesh", "Starving Void Upon Earth" and "Decay"). The short songs are reminiscent of old school Black Metal albums like the debut Bathory release.

As I said, the majority of the tracks are very fast, but there are also some songs that convey the same feeling as some more slower, doomier Polish efforts.

Overall, this is one of the best things to come out of Greece, and you should definitely have this in your collection. It's almost impossible to find any shortcomings with this stellar release.

No comments yet.
Leave a comment
for 'Human Serpent - Inhumane Minimalism'