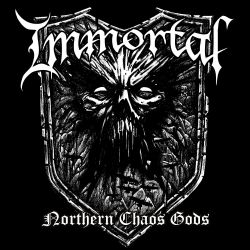 After the somewhat mediocre "All Shall Fall" album and Abbath's departure from the band, I said my goodbyes to this legendary act and prayed that Demonaz wouldn't do anything stupid, like reforming the band without Abbath! But that's exactly what happened here!

Instead of a mediocre album, we ended up with an absolute GEM! It's a very refreshing throwback to the early days of Immortal. It even goes one step further on some songs (especially the last song), and feels like a re-recording of the "Battles in the North" / "Blizzard Beasts" era of the band!

Needless to say, this album is by far the best Immortal album since "At the Heart of Winter" (easily!). Demonaz sounds just as good as Abbath (or even better than him!) and although he had a surgery on his hands a couple of years before this album, his playing is almost unaffected. One must not forget that Demonaz was the founder of the band, and the main brain behind the riffs on the early albums. The argument for who was the better guitarist may never be solved, but there's no doubt that Demonaz is one of the most talented guitar players and songwriters in the business!

Apart from the first, and maybe the seventh track, all the songs are in the same vein as the legendary "Battles in the North" album. That said, with one massive difference! A PROPER DRUMMER is present here!

The best song on the album is by far the epic "Mighty Ravendark". What a fantastic way to end an album! It has the traditional frostbite feeling that old school Immortal albums had (and then some!).

All in all, this album is what Immortal should have always been, and you can't really feel the absence of Abbath. I hope one day the disputes will stop and Abbath will rejoin the band, or just let the band go on without any trouble! (he also must stop that mediocre solo project!).

With this album, Demonaz showed the world that Immortal has a lot of potential left and can go on!

PeaceThroughAnarchy on 15th May, 2021
Trusted User - Lycanthropia.net - 160 reviews
Bang That Head That Doesn't Bang to Sarcofago.

Even without Abbath they make great music. Masterpiece album.

After Abbath Doom Occulta's departure from the band, everyone commented on what the next Immortal album would look like. Here's the answer. Simply Destroyer as the Immortal has always been.

I was expecting it to be really bad without abbath but much like demonaz' solo album i quite liked this. but its not that special.

Immortal in the news