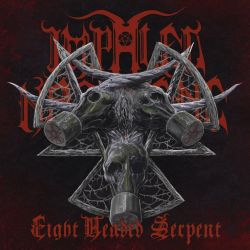 Great, but has some fillers towards the end.

Impaled Nazarene is one of my all time favourite bands. Mika is probably my favorite Black Metal vocalist ever. Even when the album is a bit weak, his vocal performance never disappoints me one bit. It didn't disappoint me today either! Seven years after the somewhat decent but verging on mediocre album in 2014, they finally released another album. When I first saw the release date on the news feed I almost wet my pants, and ran towards my computer to download and listen to it! And the result is pretty promising, I've been jamming this for the second time today.

First of all, as I said, Mika's vocals are always the biggest strength in Impaled Nazarene for me. Here he still sounds like a WWI soldier, shouting from inside of his gas mask which is filled with blood and vomit! When he screams on the end of songs like "Octagon Order" or "Debauchery and Decay", my mind went straight into their 90s albums!

Other than the exceptionally consistent vocals, Impaled Nazarene wasn't very consistent when it came to music, and here there are some differences compared to the previous efforts. Some are improvements and some are pitfalls, for me:

The first noticable change is the drum sound, which is much more organic compared to previous efforts (especially on "Pro Patria Finlandia" where the drums sounded incredibly synthetic!). Needless to say, Reima is a badass drummer, and he does a fantastic job here.

Another important factor is the lack of melodic riffs compared to the previous albums. In most of the songs, the riffs sound Punk-y and primitive and old school, but I have to say, they are not as catchy as the riffs on albums like "Pro Patria Finlandia". Another noticable change is the lack of any of the usual mad guitar solos in the songs.

However, some things about the songwriting remain intact, like the song lengths, which are almost exactly the same as the previous two albums; there are 13 songs, the first 12 are in the two-minute length mark, and the 13th song is the longest, at around five minutes. As for the style of the songs, they are much more varied, and almost every single song has a style of it's own.

The first song starts with a cool horror movie-style speech, and then goes to full speed mode abruptly. This song progresses very nicely as the song goes forward. The second song has one of the coolest riffs here, which reminds me a bit of early

Marduk, or even "In Conspiracy with Satan" from the debut

The third song has the most epic and atmospheric riff, but that's not it's biggest strength. NO NO NO. The bass line on this song is one of the most badass I've ever encountered in my life. Just because of that bass line alone this song is one of my highlights. The fourth track has the only semi-melodic riff on the whole album, and it's a very badass riff. The guitar tone and sound are fantastic here but it's on another tuning on this track.

The fifth song is probably my favourite song from the whole thing. It's another song reminiscent of early

Bathory, but this one has a bit of "The Return......" flavour (mostly because of the drumming, but partly because of that "Wind of Mayhem" riff worship!). The sixth track is one of the fastest and best riffs on the album, in the same vein as

Aeternus (especially the song "Raven and Blood" on their first mini-album).

The next two songs are full-on Punk songs! Although with different directions. "Debauchery and Decay" has a very cool DC Hardcore scene riff, and "Human Cesspool" has a very interesting bass line. So far this album has been a badass, decent release, but I'm afraid it gets weaker from this point onwards :( These five songs almost sound like last minute fillers to me.

The ninth track has the same Bathory/Hellhammer-inspired drumming, but the riffs are too chaotic, and don't really work for me. The riff on the tenth track is almost too chaotic and uninspired.

The eleventh track is another great bass driven track, the bassist sounds like he's shredding here. It's so badass that it drowns out the extremely chaotic riff! Even so, it fails to cover up the mediocre riff completely. The twelveth song has a gritty dirty riff, but it goes on for too long and doesn't really go anywhere. It's out of control!

Speaking of overlong, repetitive songs, the final track, which is the slowest and doomiest and the longest track here, is one of the most boring songs I've ever heard. They sit on the same riff for five minutes and it's not even a good riff.

Overall, this album is a major improvement compared to the previous two albums, but because of those last five songs and lack of any melody or solos, it fails to match their last masterpiece, "Pro Patria Finlandia". That album still stands as the greatest Impaled Nazarene album, post-90s.

Anyway, I've enjoyed this album, and I recommend you to avoid those last five songs and just jam the first nine. If they had put this as a 9-track EP it would have been better!

PeaceThroughAnarchy on 28th May, 2021
Trusted User - Lycanthropia.net - 160 reviews
Bang That Head That Doesn't Bang to Sarcofago.

No comments yet.
Leave a comment
for 'Impaled Nazarene - Eight Headed Serpent'

Impaled Nazarene in the news