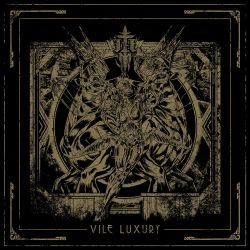 One more review is needed in order to make this album eligible for ranked awards.
76%

This probably means something to math majors!

Imperial Triumphant is one of the most extreme bands when it comes to experimentation and weird songwriting. Their first two albums were extremely obscure and weird, but on this release, it seems that they invented a new sound.

I'm not gonna beat around the bush here, this album is probably technically very impressive, but it just doesn't work. The jazzy improvisations sound like shit! And I'm not being obtuse here, I love good experimental bands, bands like Deathspell Omega, Blut Aus Nord, or even old school stuff like Voivod, but this band's experimentation gets awfully close to Gorguts territory! I also like some old school Jazz, and even some fusion Jazz like Ambient Jazz or even some Metal/Jazz, but this just DOESN'T WORK!

Maybe if you try, you can find a lot of technical info from some forums, but I still can't see exactly how this approach is musical?!

Out of the four releases by this band, this is probably the most listenable, but even so I'm 100% certain that I won't go near any of this band's previous or future releases! In fact, you know what?! I just deleted the folder containing stuff related to this band!

Avoid at all costs!