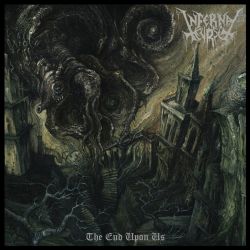 The End upon Us

The return of "The Return......" in another form, from the other side of the planet?!

Bestial Black Metal / War Metal is probably the most primitive and obscure type of Black or Death Metal. It becomes more obscure if the band in question is from more troubled parts of the world. Here we have a badass mini-album from ArgentinA a-da, hello obscurity!

This is probably one of the most obscure releases I've ever come across! (and Heavy too, boy!). The riffs are so fuckin' dirty and aggressive that it almost crosses into the hurtful-for-ears category!

The atmosphere is incredibly spooky (thanks mainly to the incredible vocal performances!). The drumming is extremely well performed, but boy oh boy, those riffs stole the show in a way that you forget about the other stuff! That guitar tone is sinister!

If you like Blasphemy, you should definitely check this stellar masterpiece! In some ways, it blows every Blasphemy release away! Such a badass release!

Although the production is not that successful, it gives a badass atmosphere and apocalypse-like feeling to it. In some ways, this reminds me of "The Return......" album by Bathory. There is the same kind of obscure atmosphere caused by a weird production!

Needless to say, the songs here are awesome from start to finish, but that second song! God damn, that riff is so fucking dirty!

Overall, one of the best things to come out of Argentina!

PeaceThroughAnarchy on 16th May, 2021
Trusted User - Lycanthropia.net - 160 reviews
Bang That Head That Doesn't Bang to Sarcofago.

0 Comments
for 'Infernal Curse - The End upon Us'

No comments yet.
Leave a comment
for 'Infernal Curse - The End upon Us'

Leave a comment
for 'Infernal Curse - The End upon Us'