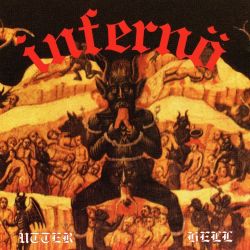 Even though the idea of mixing the badass thrashy riffs with the more obscure sounds existed since the 80s, with bands such as

Sabbat, it wasn't until the mid 1990s where the term "Black/Thrash" started to be used and perfected. Many argue that

Aura Noir's "Black Thrash Attack" was the true starting point and peak of this style of music (in the same way that "In the Nightside Eclipse" was the start and peak of Symphonic Black Metal).

Don't get me wrong, I adore Aura Noir, but I think when it comes to Black/Thrash, the start and peak of it was on this Aura Noir side-project! Both "Black Thrash Attack" and this album were released at around the same time in 1996. It seems that Agressor and Olav shared lots of ideas at that time, because the two albums in question sound remarkably similar in attitude and overall playing techniques!

If you look at the song titles here, you may see some familiar names like "Torment Her" (obviously a tribute to

Destruction), and so on. Well, those are not accidents! This album in it's whole is a tribute to the legacy of German Thrash Gods like Destruction, Kreator, Sodom or even some of the American ones like Exodus. Although some riffs and verses are almost sampled from those legends, this isn't just a mere Thrash Metal Tribute album.

I know that many people with disagree with me and say that this is just a Thrash Metal album (which is respectable), you can write your argument as a comment or review, but in my opinion this is the missing link between 80s German old school Black/Thrash bands and the 90s full-on Black/Thrash bands. Alright, the vocalist's silly name and drunk performance maybe a little 80s

Tankard, but seriously, you can't get more Black than this MF here!

The production is crisp as fuck, the guitar tone is INCREDIBLY thick and heavy, and the atmosphere is quite obscure and evil.

Overall, I think this is just as important as "Black Thrash Attack", and should be taken more seriously! It deserves to be in the same place and recognition level as the mentioned album.

No comments yet.
Leave a comment
for 'Infernö (NOR) - Utter Hell'

Infernö (NOR) in the news