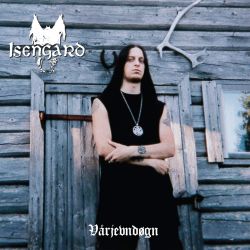 Isengard is one of the most underrated little projects in the Norwegian scene. It's interesting, mostly because it's so goddamn different than anything else in that scene. The band's early output shows a very young Fenriz who was obsessed with Death Metal and the traditional Doom Metal bands of the 80s. Later down the road, the band started to develop into the great Pagan Black Metal band that we know and love.

This album is a compilation of some of the unreleased stuff from those early days. All the songs except the seventh track are from the late 80s and early 90s.

This album is probably one of the most weird releases ever (and a good one at that). Tracks 4 and 8 were released before as a single in 2016, so we won't talk about them that much (even though they
Are the strongest songs here). It starts with a very thrashy and catchy song called "Dragon Fly (Proceed upon the Journey)". The riffs are fantastic, and the vocals are the usual charming full-on metal Fenriz vocals.

The album continues with the fantastic Doom Metal worship of "Floating with the Ancient Tide", which is very much similar to some of the stuff from Fenriz' side-project, Valhall. The riff isn't as memorable, but the harmonies and the vocals are badass.

The most obvious Doom Metal worship here is the song "Slash at the Sun", which would remind me of the Jon Carter song from Fenriz' other side-project, Fenriz' Red Planet. One of the highlights of the album, easily!

"A Shape in the Dark" is a really enjoyable mid-pace song, with a gritty guitar tone. The only weak link is the weird Punk song that we have on track 7. A punk song with Norwegian lyrics? As cool as it sounds, it's almost unlistenable! It's the only song that doesn't really fit this album.

The outro song, "The Solar Winds Mantra", is a very beautiful acoustic track, which is pure 60s man!
Fenriz sounds dreamy on this song, it's very much folk rock / psychedelic rock worship. What a way to end an album.

The best track of the album is, as I said, "The Light". What a fantastic Doom Metal song that is. I wish the recording was a bit better, but still it's very nice indeed.

If it weren't for that seventh track and the production, this would have been really fantastic, but there we have it. All in all, it's really difficult to call this Black Metal, or even Doom Metal, so like Fenriz himself calls it, we shall name this a cult metal album. And a damn enjoyable one at that. Get it!

Lots of doom orientated outtakes. great but not perfect. they should be re-recorded.