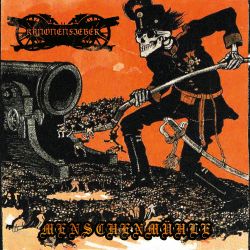 2021 has been, despite Covid, that canceled all shows, a great year for Black Metal in my opinion, and this album is for me the best of the year (I know I tell this about the album "A Diabolical Thirst" by Spectral Wound, but I was not knowing this band when I said that). Menschenmühle made an insane debut that made the band known in the underground scene really quickly. Let's talk about this German pearl.

The strongest point of this album is clearly the guitar riff, I'm pretty sure that no one will name a point before this one. They are really influenced by Death Metal and really clear, you can completely hear every single note. They are also really melodic, and Noise, the guy who does every instrument, is often using some little high riff over his main riff that makes the song really awesome. The first song, "Die Feuertaufe", is a really good example to name, probably the most listened song of the album.

Another really good point are the drums, they are pretty technical for Black Metal but above all very blasting and precise. A good example will be the third song, named "Die Schlacht bei Tannenberg", that is one of the best songs of the album. Noise doesn't have a really special voice, a normal Black Metal screamed voice, but what makes it better is the use of German for the lyrics. German is of course a really aggressive language, and when screamed, it becomes awesome. And a little point that I completely love is at 3:56 in the song "Grabenlieder", the use of the gun sound and after the drums and the guitar are playing at the same beat, insane moment, go listen to it. That's it for the good point.

On the other hand, I found some moment in the album a bit weak, and the the choruses are a bit repetitive. A good example of a weak moment is the song "Dicke Bertha", Noise goes a bit more doomy and really Death Metal influenced, but it doesn't fit with the rest. The song is between 2 really good songs, but completely not in the same genre than the one between them, so it breaks the mood a bit. And what become repetitive are the choruses, they are all based on the same shape. And I don't know why but I feel like the songs are lasting an eternity. They are good, but I don't know why passing through the album is really long. But, other than these points, everything is fucking top.

To conclude this review, I really recommend this album if you are a Black Metal or Death Metal fan at all. This album is just fucking good. The best songs of this album are "Die Feuertaufe", "Ins Niemandsland", "Grabenkampf" and "Unterstandsangst", and the outro is also fucking top but honestly, listen to the whole album, you will not waste your time. Hope you will enjoy this album as much as I do, cheers!

A fresh Version from Bathory's Hammerheart or Nordland. But i like it !