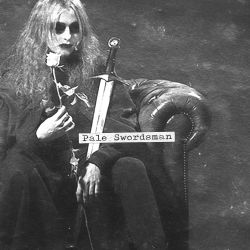 4 users have collected this album

As one can guess from the sole member's name (Crying Orc), this band is another among the thousands of Old School melancholic, monotone Black Metal bands that worship

Burzum, and the myriads of bands that tried to create that raw, melancholic sound in France!

Earlier efforts of this band were too primitive, and lacked some energy and memorable riffs. This, his second full-length, is much the same, but shows much more maturity and improvement in the songwriting and performance.

As I mentioned above, this band's music sounds like Les Légions Noires bands in general, but here there are a bit more acoustic and ambient parts, which reduces the primitive soundscape stereotyped with said bands (songs such as "Amor", "Nocturne", "Lilly" and "Swordsman", which are full-on piano / acoustic guitar parts), but I have to say, they create a very sorrowful atmosphere that I encountered on some of the stuff by

As you would expect from such bands, the production is unpolished and extremely ugly and primitive. The drums are the same old snare drum repetition that you could hear on any 90s Black Legion bands!
And although the production lacks some energy and power, the overall sound is very emotional and touching.

The songwriting is much crisper, shorter and better than before (unlike the previous album which was too long and boring!). The riffs have a lot of early 90s Burzum to them. If you listen to songs like "Amid the Stars" or "Night Descends", you can feel a lot of similarities with the first Burzum album (and specifically one song, "A Lost Forgotten Sad Spirit"!), and this similarity is partly thanks to the riffs, but also the bass lines, which are pretty much identical to early Burzum bass work.

Another Burzum-like aspect is the minimal usage of keyboards on the main songs, which are very much reminiscent of "Filosofem" erA lso, the lyrics are very touching and tragic (especially on the Ballad song "Swordsman").

Overall, this is an album with lots of flaws and shortcomings, but if you put aside your critical self, you can feel the fact that this guy has brought something very personal to Black Metal, just like the aforementioned legends! Recommended.

No comments yet.
Leave a comment
for 'Këkht Aräkh - Pale Swordsman'