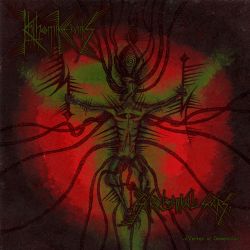 Khthoniik Cerviiks is one of the maddest bands i've ever encountered. It's both experimental and raw, chaotic Black Metal wrapped in a marble package!

After releasing some OK demos, this band put out their first full-length album. On this album, Khthoniik Cerviiks went crazy with the song structures. Even though most of the songs are chaotic and fast all the way, there are some sudden changes in the song sections which are a very satisfying touch.

Even though this album has a very badass vocal performance, I fear the vocals are overshadowed by the incredible instrumentations! As I mentioned above, there are lots of sudden changes in song structures and riffs. One moment the song is melodic AF, a bit later it turns into a full-on Prog Metal album!

As for the production, unlike the majority of the experimental acts which try and keep the production as clean as possible, this band selected a unique sound, which is very raw and primitive, although, because of the high mix of the guitars, you can still hear the amazing riffs over the obscure atmosphere.

Even though some people compare this band with Bölzer, Demilich or even Voivoid, I believe that it's a very unique band. The only shortcoming for me is the repetition, which seems a bit unnecessary, as this is supposed to be a little more aggressive rather than atmospheric / melancholic.

The best song of the album is by far the epic "Miindwrecked (Project Eigengalaxy)".

No comments yet.
Leave a comment
for 'Khthoniik Cerviiks - SeroLogiikal Scars (Vertex of Dementiia)'