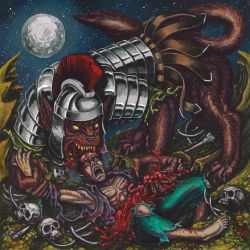 The self-titled Kommodus album is a different animal compared to the previous demos released. The riffs are much more thrashy and catchy, and the production is much more crisp (well, crisp for Raw Black Metal!), but there is some stuff that is unaltered, this band still avoids the chaotic Black Metal drumming and riffing.

The lyrical themes of this album are for the most part related to the Roman Empire and its mythology.

As I mentioned earlier, the production is much more cleaner compared to the demos, but that doesn't really say anything that special. The demos were almost too rough and raw, and this change in production is very much a pleasant aspect of the album, but be advised, because this album is still one of the most lo-fi Albums I've ever heard!

The guitar work on this album is very unique. Even though they are very aggressive and dynamic, they have some old school Metal feeling to them. It's not hard to make connections between the riffs and Motörhead! The vocals are incredibly haunting and well performed (especially on songs like "Return to Tribe").

Overall, this is a very unique band (in fact it's difficult to make comparisons with other bands) for fans of old school raw Black Metal, this is really a nice, unique approach. Recommended!

PeaceThroughAnarchy on 19th May, 2021
Trusted User - Lycanthropia.net - 155 reviews
Bang That Head That Doesn't Bang to Sarcofago.

What an absolute banger, sounds like Bolzer meets Destroyer 666.

And a one-man band at that, impressive af

couldn't agree with you more, You're absolutely right!
it sort of has that sophisticated Bolzer Grooves in it, but i guess it's a bit difficult too realize it because of the Production. and you're exactly right with the D666 comparison.
Come to think of it, There is a bit of old school Bulldozer going on too! (even some Old school Ruins of Beverast or even Khthoniik Cerviiks too!). Man, this band is Badass! it has everything!