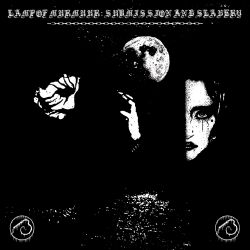 Submitted by Warblackmetal666
3 users have collected this album

Lamp of Murmuur is one of the greatest and most consistent bands of recent years which always manages to amaze me with every new release! As I mentioned in my

Revenant Marquis review, I discovered this band (and this new wave of Raw BM!) with the amazing 2020 split album. Since then, every subsequent album, EP, demo is an improvement over the previous release! This, their latest full-length, came as a massive surprise for me. This is one of the greatest albums I have ever listened to (not just in Black Metal!).

Perhaps no other Black Metal album that I know of, has incorporated this much 80s Goth Rock / Post-punk influences into the musical part!

Sisters of Mercy fans like myself will easily identify the album cover as a clear tribute to their 1987 classic "Floodland". The SoM (and other Post-Punk) influences can be further felt on the songs themselves as well (most clearly on the third track "Dominatrix’s Call"). However; don't be fooled into thinking that this album is full of cheezy 80s synth-pop! The usage of synths and other tiny post-punk influenced melodies are cleverly buried beneath the brilliant old school Raw Black Metal sound.

Before we get deeper into the album's details, let me clarify that this album is easily my favourite album of 2021 so far. Even though we still have a couple of months remaining till the end of the year, I don't think any album will come close to this masterpiece!

Apart from the third track (which is clearly a

Joy Division influenced song), there are 3 more tracks to suggest this Post-punk Influence. Tracks 2 and 5 are clearly influenced by some other Post-Punk / Gothic Rock bands such as mid era

The Cure, and the final cover track is obviously inspired by another great New Wave band,

Christian Death. (I Know I know! I'm not good at being funny haha). On a more serious point, I think I still prefer the original version of this song, but I have to say I really respect this new attempt as well.

The first song is one hell of an opener. This song alone could have completed a studio album on its own (but thankfully there are some other great tunes as a bonus as well!). That drum intro is a great sign that this album is going to rock like hell! Speaking of drums; the drumming on this album is incredibly dynamic and well performed. People sometimes forget the Black Metal formula when it comes to the drumming, but this guy (whoever the fuck he is!) didn't skip any of the 80s and 90s Primitive Metal classes! The song slows down on some moments and ventures into Death Metal and old school Tormentor, and even sisters of Mercy in the span of a couple of minutes (which showcases the great songwriting on this album). Also, there is a rather beautiful, loud, clean vocal attempt which is extremely cool.

The second song is one of the best interlude songs EVER! Just try and beat this shit when choosing a playlist for a rainy, melancholic, solitary night! This song creates an ambience that I haven't encountered much. Dungeon synth meets 80s darkwave!

After the amazing interlude we arrive at the catchiest song on offer, "Dominatrix’s Call". As I mentioned before, this song is the most obvious candidate to choose when we talk about the 80s New Wave influences. Part Joy Division, part SoM! Also, the vocals on this song are very different (almost original). Just like the first track, the clean vocal attempts here are extremely well executed and approach something purely original.

Judas priest!), then it changes the whole tuning and settings concerning the guitars and everything and turns into an AMAZING guitar solo that can be described as an old school roots rock / blues rock worship (Dire Straits meets Rory Gallagher with a hint of post-punk!).

I cant praise enough the production of this album. Whether it is the icy tones of the guitars on the raw moments, or the traditional Heavy/Doom or Death Metal or New wave or Blues/Roots rock moments, this guy knows how to tune a guitar and record some shit! It's sometimes hard to believe that only one dude is making this variety of sounds on one album!

Overall, this album is going in the right direction! Every other band should take some lessons from this guy. He is keeping the 80s and early 90s mysterious spirit of Black Metal and trying to progress and actually put some other elements from other sources of influence without "Taking it Further" and just focusing on the atmosphere and shit like that (Ahhhem most of Symphonic and Melodic Black Metal bands). This is Black Metal at it's purest form. HIGHLY RECOMMENDED!

0 Comments
for 'Lamp of Murmuur - Submission and Slavery'

No comments yet.
Leave a comment
for 'Lamp of Murmuur - Submission and Slavery'

Leave a comment
for 'Lamp of Murmuur - Submission and Slavery'