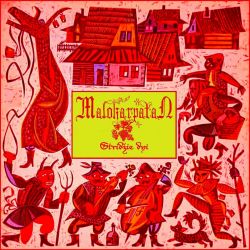 One more review is needed in order to make this album eligible for ranked awards
(Top 100 & Awards page).
96%

Unique and original to the bone!

Malokarpatan are arguably the best example of the Eastern-European "obscure music" revival that's been happening in the past few years. It's not that difficult to realize that these guys were obsessed with legendary 80s, 90s acts from that other eastern block country next to them called simply Czechia! (most notably Root and Master's Hammer)

Don't get me wrong though, this is not a Master's Hammer clone band! Even though there are tons of bands like that, none are as unique and original in this way. In some ways, they took the Master's Hammer formula and tried to regress it to an even more old school sound. One can hear a lot of early Bulldozer, a bit of old school Venom and Bathory, with a little King Diamond inspiration on the vocals! (Also let's not forget the crust-punk era of Darkthrone and the 80s inspirations for those!)

This weird mixture alone would make this a very unique album indeed, because there are not that many bands that manage this approach in their career (and Malokarpatan definitely manages this!), but there are some very unique and Slavic factors in the mix, which makes it almost a rare "one-off" type of uniqueness!

On this album, they try and add some Slovakian folklore, with the occasional samples from other Slovak works (like folk songs and film scores...) in a very beautiful way. Unlike the majority, who incorporate this element in a very cheesy way, they do it in a very classy and to-the-point manner.

The production on this record is a killer one. Pure organic sound coming straight from the 80s. The guitars in particular are tuned in the "Reverb-em-all" fashion! There are some solos more identifiable with 80s classic Heavy Metal that are just awesome! Guitar solos rarely work with extreme forms of metal, but boy oh boy it does work here in spades!

The rhythm section on this album is just perfect, in one word. I think finally someone listened to Fenriz' teachings! The drumming is very much primitive and monotonous, but it's performed in a flawless way that you wouldn't believe! As for the Bass, HOLY SHIT! You don't need to be a musician to understand the bass lines, they are just KILLER on every single moment of album. This album is almost a template for the perfect production.

As for the Vocals, they are very weird indeed. A mixture of old school King Diamond, Franta Štorm and a drunk Fenriz! (Especially on track 7). Either way you look at it, they are fantastic!

Highlights? I don't think so! This album is one of those classic albums where you don't care for just one riff or one solo... Every song here is a killer in every millisecond of it. But there are of course some unforgettable riffs and moments, like tracks 2 and 9, and the final part of track 7.

Needless to say, this is definitely a future classic that doesn't get the attention it deserves right now! Thanks to albums like this, we have a little hope for the immortality of the underground music scene.

No comments yet.
Leave a comment
for 'Malokarpatan - Stridžie Dni'